Eliot looked at the dog, at me, at Russ, back at the dog. Maybe the huge foolish grins on our faces started his mental processing of what just happened. Maybe it was my unintelligible squeak saying "It's OUR dog!"

*****************
Because we know good people, we have several friends who foster dogs. Every time they posted pics of their latest foster over the last six months, Russ and I would have "the chat." Eliot has been asking for a dog for the last two years. We've read articles on how they promote healthy brain activity and teach basic life responsibility in children. (and by "we've read" I mean I post these articles generously to Russ' inbox…) Every time a pic would pop up on my newsfeed, I'd screenshot it with some emotional plea and text it to him. He was all...

I could see that over months of this I was wearing him down. Every once in awhile he'd nibble. He'd ask a noncommittal question. I'd scurry to find out the answer. Then he'd say no. I'd casually mention that Dez and I went through the Humane Society after pre-school. He's say "Fun!" and change the topic. You may hear a "no" in that but me? Those were gateway to a "yes." Not to mention Eliot's sincere plea. Without knowing it, he was working Russ. Sharing memories, unprompted, of times he had with Daisy, talking about how Daisy was his best friend, etc. We could see there was a legitimate void in his life.

Right around the start of November I could see Russ was on board. So much so that we were both checking almost daily to stray rescue sites and other dog shelters websites. We'd see a potential dog and both agree it wasn't the right one. I emailed back and forth with my fostering friends and before we could make a decision, their foster dog would be adopted by someone else. Then one day in early December a friend posted a link on her FB newsfeed of a neighbor who needed to find a new home for a couple of her pets. I texted Russ, "I found our dog." He had meetings all day so I didn't exactly get the reaction I was hoping for. Without his consent I called the owner and set up a meet-n-greet for Russ' day off. Sometimes ya just know.

We set up the date for the drop off at just a few days later. For days we knew what was coming. We snuck out to a pet store to stock up on stuff but got distracted by the cool dog toys. "Eliot would pick this one!" "Wait, he'd love this one!" We were giddy.

For the next few days it took everything in me not to tell him what was about to happen. He was mad about having to do homework, he was frustrated with his brother for ruining something of his, he didn't feel good one day, etc. I'd just hug him hard as my non-verbal way of saying, "BUT YOU'RE GETTING A DOG! THE PERFECT DOG!" With every down he felt, my smile got bigger. He must have been a little confused.

The drop off was set up for Friday afternoon so that when he came home from school, she'd be here. I was busting at the seams as I drove him to school. HE WAS FINALLY GETTING A DOG! Who cares about practicing your spelling words for the test that morning, you're getting a dog! THIS AFTERNOON! AND YOU HAVE NO IDEA!

We came up with an elaborate scavenger hunt with clues and gifts, starting with a clue wrapped and under the tree. Russ hid the dog outside while I picked E up from school.

"Well, what do you think of getting an early Christmas present?"

He took a sweet forever taking off his coat and putting his backpack up. And then asked for a snack. And that's when I riggled and jiggled in impatience and yelled, "OPEN YOUR CHRISTMAS PRESENT!"

He S.L.O.W.L.Y. went through each clue, annoyed that we'd try to answer it for him, just to move on. FINALLY the clues led him outside and to the back yard.

Our clues were obviously not very obvious.

Eliot spent that entire weekend obsessing over our new dog. We've had her for three months now and at least every other day he's says, "Can you believe we have a dog? Marzipan, can you believe you're our dog? Mom, can you believe how perfect Marzi is?" She's the first thing he looks for every morning. He tells her how beautiful she is when she walks by him. He truly loves loves loves this dog. 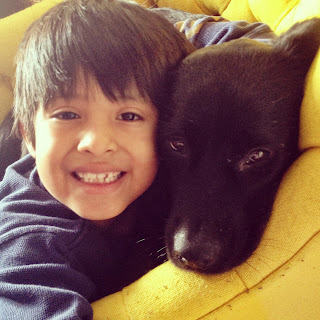 Being on this side of good gift giving feels like nothing else.

I imagine this is how God felt right before we opened the email with Eliot's referral picture. How did he feel as he watched us pick up the phone to hear, "Katie, check your email, I sent you and Russ a referral. I think this is the one." I've never thought about God feeling giddy but I can't imagine him feeling otherwise the morning we left to go strawberry picking and ended up getting the Dez "phone call" on our way there. He knew what our family would look like and what amazing gifts our children are. That's not to oversimplify the complexities of adoption, but God knew and I really believe he was pretty excited for us to finally meet these two turkeys.