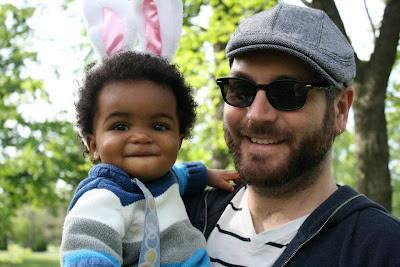 This little turkey is fast. And curious. And thinks he doesn't need to listen to the word "no."

I'm already blaming him for the increase of my grays, and he's not even a year old. He might be our emergency room baby.

He's been crawling since 8 months and looks like one of those mechanical baby dolls you wind up and let loose. He's still so itty bitty.

One morning Eliot was playing in the living room, I was finishing getting myself ready. Dez usually doesn't leave Eliot's side, no matter if Eliot's playing with him or not. But that morning he was crawling between my place in the back of the house and back up front where E was.

Then I felt it. The pause in the air. I froze and listened intently while walking rapidly out of my room. The pause interrupted by Desmond's cry. The cry that makes you run the last few steps left between you and him.

From the last moment I checked on him, it took just a few seconds for him to be in the bathroom. He knew exactly where he wanted to go. Straight for my curling iron which I'd just unplugged moments ago, which I'd tucked as far back and up as possible to cool off.

He was sitting on the floor, the curling iron in front of him, crying. A deep cry.

I frantically searched his face, his arms, his hands, his feet looking for the burns. Everything appeared intact. The only sign of anything was a scratch (that didn't even break the skin) from the seam of handle.

He had pulled the curling iron off the stand by the cord. He must have reached his short chubby arms all the way between the stand and the sink to reach it. I have no question that God intervened so that only the handle made contact with the little investigator. Even with it sitting on the floor in front of him, he didn't attempt to grab it, which is also a miracle.

These moments are one of my least favorite parts of parenting. Thinking over the "what if"s. Immediately I thought of
this incident from when eliot was 2 1/2. I still have no idea how Eliot got out of that unscathed.

UGH! I hate those panic/take your breath away/sigh of relief/then think about all the what could have been moments! So glad he is ok.

Hi Katie--this is Rebecca H.! Congrats on ADORABLE Desmond! He's amazing (and so glad he's unscathed--God is truly good). And Eliot is growing up so fast...
Just wanted to say hello and we ought to hook up sometime!