One day roughly ten years ago I wasn't feeling quite right. I called in to work and headed to the doc. The doc announced that much to everyone's surprise, I was pregnant. However, it was super high risk and ordered me to take the rest of the week off and stay off my feet until my next appointment a week later. Except this was the biggest news in our married life so I made a quick detour to Target and bought the smallest baseball glove I could find and shoved it in a gift bag. Russ had no idea what would be welcoming him at the door that afternoon. For the rest of the day while watching mindless TV while chillin' on the couch, I kept staring at the bag and listening to every sound from outside, beyond anxious for that slam of the car door.

Like every day, Russ came in the front door after work. I tried not to make eye contact, convinced I would give it away, but told him to open his surprise. I'll never forget his face as he connected the dots. The hugs, the tears, the phone calls...it was a really great day.

A week later there were more hugs, tears and phone calls but it was a really bad day. After the doc confirmed my miscarriage, Russ took the baseball mitt to a box in the basement, far out of sight. We've moved twice since then and it's come along, safely hidden in a box. At some point it ended up in Eliot's sports basket.

This spring was Eliot's first year in T-ball. At one point getting ready for practice he asked Russ who bought him that glove. Russ quietly told him that I bought it years ago, knowing we'd need it for him, the best T-ball player ever. 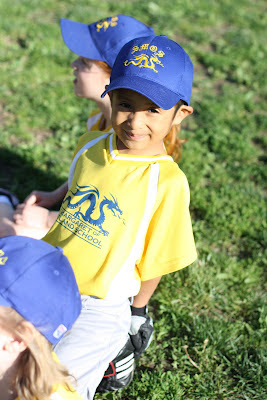 For me, this tiny seemingly insignificant detail of our fertility struggle was finally redeemed. It took ten years and the biggest fight of my life, but that mitt, dirty from actual time on the field, signified arriving at our dream.

(If this post seems out of left field {ha! left field...}, sorry. There's been quite a rise in fertility questions in my inbox lately so I thought I'd just put this out there.) (There might be more on this general topic soon) (Or maybe not) (just keeping you guessing...)
Posted by Katie at 10:28 AM

A beautiful story of redemption. Thank you so much for sharing!

so, so beautiful. what a testimony He's given you.

Thank you, Katie. All I can say is that I think your post was meant for me today...

Oh I have tears in my eyes and I am so thankful you shared this today. Bless you and your perfect-for-you family.

tears. aren't you so glad that we serve a father who is so good. wow, great post new friend.