Other than an excuse for a new wardrobe, being pregnant was never my desire. It's beautiful and no one knows more than me how miraculous it is but my desire was to have biological children and I would tolerate being pregnant to get them. But that never happened. Slowly over time we've grieved this and have settled into our amazing story quite happily.

Grieving didn't happen easily, even with our arms full of the greatest children on the planet. That certainly helped but sorrow sneaks up on me. There's still triggers. I still stifle a urge to punch women in the face who joke about getting pregnant on accident. (Not really...but maybe a little?) I still get sad sometimes seeing little girls with brunette hair and green eyes (what I'd always pictured our little girl to look like). I went ahead and unfriended an acquiantance on Facebook who was pregnant the same time I was. There was no reason to see a constant stream of pics of her son playing baseball or what he made her for Mother's Day. That was just a weird form of infertility torture. Congrats but no thank you.

To be honest? I'm not sure I've said this on here or not, but overall I'm thankful for this part of our story. Not just because the timing led us to our boys but because I can now offer what I so longed for back then. When we were in the thick of shots, ultrasounds, etc the only people that could relate ended up having biological children. Some people were compassionate and gracious but there were still lots of "Hang in there! It'll happen!"s and the like. I had no one to look at and ask, "But what if it doesn't?" And now I can be that for others.

We hosted an event at our church right before Mother's Day this year for couples struggling with infertility, a place to come and ask questions, to be reminded of God's promises not being tied to a positive pregnancy test. A woman asked to speak to me after. She asked if I was okay being infertile still. When I said yes she asked when that happened, going from pursuing something so diligently with every resource you have to feeling peace that it didn't happen, essentially asking when is it okay to say stop.

And it's okay. It's okay to move on once you're ready. I struggled with this, thinking it was a sign that I lacked faith that God could still do this. But I misread that. Moving on is another part of grieving, letting the dream be transformed by The Storyteller.

Someone sent this quote to me once and I've held onto it's truth:

"The only way to dispossess the heart of an old affection is through the expulsive power of a new one." Thomas Chalmers. (19th century Scottish dude.)

And by expulsive power I mean-> 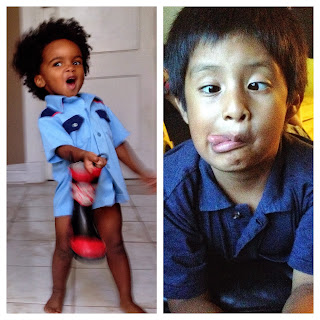 Unless God pulls a "Sarai", I will always be infertile. It doesn't define me but I've allowed it to help shape me. I won't fight the grief when it sneaks up on me but it no longer makes me angry. If anything, it makes me squeeze my boys harder and love on them a little bit more.
Posted by Katie at 10:47 AM

Thank you for this.

Yes. Nodding my head profusely. Thank you for sharing this.

Thank you. 😔. You are brave and wonderful and blessed as well as a blessing to others!

When we were first starting the adoption process, an adoptive mom from church took me to lunch and just shared their story. She revealed that right before their 3rd adoption, they tried IVF one more time. I called my husband from the car sobbing, "Am I going to feel like this forever? Am I ever going to be done with infertility?" 8 years later, I guess the answer is...yes & no. You've done a great job putting it into words. Thank you.

This is really phenomenal. Thank you so much for courageously sharing your story!

This is really phenomenal. Thank you so much for courageously sharing your story!