There's enough new people in our world that ^ phrase won't make sense. Knowing some of them are lazy clickers I'll explain briefly, but also link in case some want to do their own research.

Cliff notes: On a particularly emotional day I saw a commercial for some cable provider where a family of 6 is all slammed together on a couch with the cliche huge bowl of popcorn watching a movie and it hit me. I wanted a full couch. I was insanely in love with our son but knew we were supposed to be more. (Or Mohr? Either one.) Well, it's that time again. Our couch is squirrelier (new word coming to Webster Dictionary 2014) and fuzzier with the addition of Dez but there's still room...

Since starting the adoption process back in '06 we've never felt peace about returning to the fertility world. We've started to and just known it wasn't for us. (I have thoughts on this that I'll share in another post, lucky you)

The Mohr's are signing up for an older child adoption through the state. 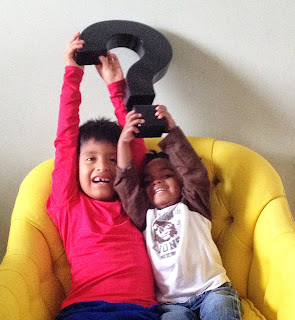 We've already met for an initial house walk through with a social worker, filled out some oh-so-familiar paperwork and are signed up for the adoption classes in November. We're waiting to hear what the next steps will be after that. We know we need to update our home study but not sure passed that. We could be paired with a waiting child soon or it could take awhile, we don't know. We're fine hangin' in the waiting room until a team decides we're the right family for a child.

We'll update as we are able to! Thanks for joining in our journey, as always!

Just so you know, this has been on my heart lately for you guys! Thank you for allowing us to walk with you through this journey. I can't wait to see who God sits on your couch and there is one thing I know for sure, there is plenty of love waiting for her or him! Love you!

When I saw the title of this post I got so excited :) and OMG after reading it I am even more excited for you!!
xoxoxoxo