It started slowly. And wabbly. Eliot would take a few step here and there, topple over and crash to the ground, then take off crawling at 100 mph as if to say, "this is way easier and much faster, dad." Then he hit a point where it became amusing. He figured out he could hop out of his little chair, land on his feet and get over to the the coffee table. Now it was fun, but still slow and awkward, so unless he was just walking for sheer entertainment, crawling was still the preferred mode of travel. After all, Daisy and Sammie are way faster than mom and dad. Aren't four legs better than two? Keep in mind, Eliot is an extremely fast crawler, so it was a practical choice (he's a very rational and logical young man).


(This video was taken several weeks ago. As you can see, he's feeling quite silly and will only take a couple steps.)


(This was taken last week... sorry that it's sideways! He's pretty proud of himself. This was still pretty early on in the walking game, so he gives up pretty quickly and moves into the head-stand, one of his silly habits.)

This week Mr. Independent took a turn. We walk now. It has officially become the preferred mode of transportation.

I have a habit of plopping him down on his little diaper-butt when I set him on the floor. He doesn't let me do that. As soon as he starts making the descent from daddy's arms to the floor he gets his landing gear ready to hit the floor running... literally. When he discovered that he can pick up his toys and run around the house with them it was on. Maybe he aspires to be a UPS man someday? Oh, and playing ball has gone to a whole new level. And finally, yesterday as we walked home from the park down the street, it happened. He taught himself the "let me down" squirm. One minute too long in mom and dad's arms and there he goes... Mr. Independent can walk on his own now... "Let me down!" 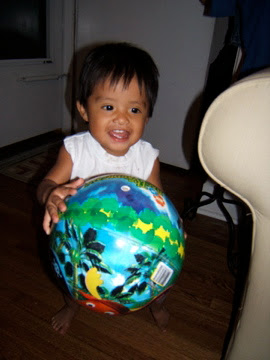 He wasn't great at it at first, but he's literally practicing all of the time. It's actually pretty fascinating to see how well he's progressed even in a couple of days. It's like he made the decision that he was just gonna pick it up this week, and since then each day he has gotten so much better. He's all over the place now. Chasing the dogs, ripping the magnets off the fridge, carrying his stuff to every possible spot in the house, etc. Consequently, we have entered a whole new realm as well. Basketball fans could call it The Nolan Richardson School of Parenting: intensely fast paced, non-stop action, and a full-court-press defense (that calls for lots of double-teams). So Katie and I are conditioning, running drills during his naps, whipping ourselves into shape so we can keep up with this guy. Even as I type this Katie is chasing him around trying to keep him out of everything. We're having so much fun! 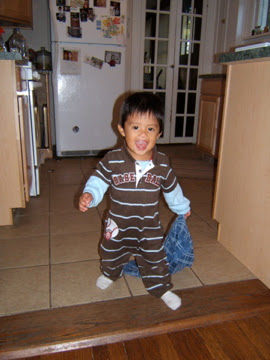 One more cute little thing. He follows us everywhere in the house now that he can keep up, and he's learned to "knock, knock" on closed doors from one of his books. So you know what that means, no more using the bathroom in private!
Posted by Katie at 10:08 PM

They loaded for me, and are really cute! Erin, it's all you.
You guys, he really is the cutest thing in the world!!!!!

whoa...way to go El!! he's learning fast...he's really a genius! i mean when i was there monday he was still a wobbling walker and preferred the crawling (it was much faster for him). he's just moving so fast now! Lys & I must come for a visit soon!! :-)

I saw them. Silly work filter that won't let me see YouTube. He's HILARIOUS! Hope to see you again soon.

yay eliot -- what a big boy!! and your life will never be the same!

That is the cutest thing....Elliot is awesome!!! What a fun family ya'll are....thanks for the prayers!

Yiipppppeeeee Beliot's on the run!!! I love seeing new videos of Eliot, although it makes me really miss you guys.

Nikki & Gab Gab (still at the wobbly stage....Gabi thst is!)

Eliot get ready to start saying Aunt Manda...we are going to be working hard when I get there!!!

It's all over now!!! Nothing will ever be private with a toddler on the move :) Congrats El!!!