That's a phrase heard in the Mohr house lately. It's part of our new behavior plan for Mr. I-LIKE-TO-WATCH-MOM-AND-DAD'S-FACES-WHILE-I-DO-STUFF-I'M-NOT-SUPPOSED-TO. Empathy with consequences. This idea comes from the Love and Logic series by Jim and Charles Fay.

My first exposure to this behavior mindframe was 8 years ago when I began teaching in the city. Those kids challenged every behavior idea that any of us had previously (successfully) used. So, as a staff we dove into the Love and Logic series for teachers and noticed incredible results. Needless to say, I'm a fan. I'd forgotten they also had a series for parents until our trip to LR when another young couple was talking about using it with their toddler. As soon as I got home, I got the book and began reading.

I haven't gotten as far into it as I've wanted to but so far, the stuff we've tried has worked on our little turkey who is experimenting with lots of behaviors right now. He's always been an easy baby and I want to keep it that way. We've all seen the kids in the grocery store that noone would describe as easy. Russ and I have just wanted to make sure we are proactive on behavior rather than reactive. Does that make sense?

There's many elements to this practical parenting but this post would get pretty long if I highlighted them all. I also need to finish the book and reread it before I can accurately represent the theories but I'll leave you with one of our first L&L experiments. One of their principles is to choose wisely when "saving" your children. If it's a truly dangerous situation, then obviously you need to step in. But too often, we as parents, are saving our children from natural consequences that really won't harm them. This prevents them from certain levels of autonomy and problem solving. This sets him up for a 'caution to the wind' mindset since mom is always there to rescue me instead of thinking through what might happen. For example: Eliot's is into opening drawers right now. At first I watched him like a hawk to make sure he didn't pinch his cute little fingers. Then one day Russ decided not to "save" him since it wouldn't really hurt him. Sure enough, he pushed the drawer back in along with his fingers, even though we'd saved him from doing that several times and even showed him how to do it. After a 30-second sympathy moment, he went back to opening drawers. This time he started to shut it the same way but paused and put his hand on the knob instead. Ever since then, he's closed all the drawers from the outside instead of from the top (sometimes with his belly and no hands! silly belliot!). He taught himself and the lesson stuck. When we taught him, the lesson was a nice moment between us and that's it, the behavior kept going. He had a practical lesson in Cause and Effect that we were actually preventing.

The theory is to allow your children to learn lessons while the natural consequences are small. At some point you won't be there to 'save' them and natural consequences will ensue. Hopefully before that point, we can teach Eliot to think for himself what the effect might be from his choices. 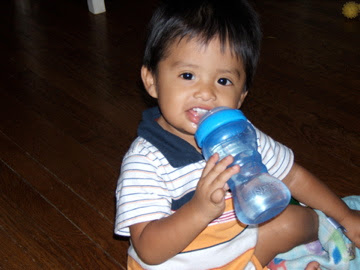 I love his precious little face!!! I really want him for my future son in law!! I love that type of parenting approach with "natural consequences". We use it very often around here. Please be careful though,as my daughters will not want to marry him if he is missing most of his fingers.Then again maybe not,his face is soooooo cute and his personality is perfect!!
"So sad" is also a term we use.It is very Montessori and I used it so much when my older boys were toddlers that now my FIL jokes with the whole family when something happens and he uses the"so sad" term.

you're the second one I've heard about that book from -- will have to put it on my list of things to get! He's getting soo big!

I just heard about a Love & Logic parenting class out here in O'fallon! Glad to get a good recommendation!

OMG, I need that book... do you think it would work on teenagers? We are constantly talking to them about how their actions have consequences... sometimes the consequences are good and sometimes bad. You would think kids who were neglected as young children would automaticly learn about natural consequences (because they didn't have anyone to "protect" them)... but they don't. I guess that is why they tell you to do it while they are young when the consequences are small. Keep sharing the knowledge!

Very cool! It's exciting and encouraging to hear other's stories. I've also found that L&L helps me not get so worked up in the moment...have you? hope that makes sense, but anyway, thanks for sharing.