Again, Russ and I are starting a tradition and calling it 'annual' when it's only happened this once!

Before I share the pics, let me offer a little background. Russ was employed by our church several years ago as the youth leader. He started as a junior high guy and then moved up (along with the kids we spent so much time with) to senior high. After three years we felt God calling him to pursue his music full-time. However, this was not the end of our time with these 'kids'. We have been blessed to still be apart of many of their lives. All of them are in college or beyond at this point so we hardly get to see them during the year. Some of them were away for the summer so they didn't get to meet Eliot yet so we threw a Christmas party in hopes of a chance to steal some of their break time from them!

Eliot found a couple new girlfriends and reunited with his basketball buddies. He LOVES the college kids! He got a little bossy with some of the girls as he would grab a book, point at one of them and then point to where she should sit and read to him. Of course, they didn't seem to mind. They were all quite impressed with Eliot's dance moves and B-ball skills. The funny part for me was after Eliot went to bed, I caught several of the kids playing with his toys. I was highly entertained by that.

If we were ever curious about whether or not Eliot is a good sleeper, last night tested it out. He went to bed without a peep even with 20+ college students filling our not-so-huge-house! Several of the guys teamed up on Russ, trying to wrestle him to the ground (sidenote: Russ can still take them with little to no problem! So, by default, if I can still win while wrestling Russ and he beat those guys, then I am clearly the winner of all of them, right?), some weird game that involved other physical violence broke out in the living room, several rounds of MadGab were played and then a heated game of Pit finished out the night. None of these listed are quiet and all of them happened right outside Eliot's room. However, not a peep was heard.

We had a great night. It was such a blessing to visit with all these 'kids' again. It's odd to us that they're so far along in life as our memories of them started with braces and needing rides to everything. It's weird to them that Russ and I are in our 30's and got married when we were close to their age. My girls that I led in small group for years blessed me by reminiscing about our repetitive prayer times so many years ago with our struggle in the desire to start a family and comparing that to now. Just another opportunity to look at where the Lord has taken us and thank Him. I'll leave you with a few snapshots of our night! 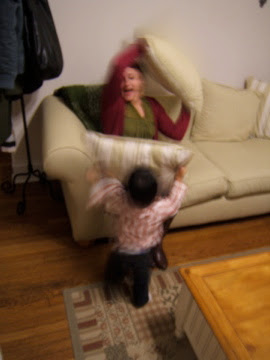 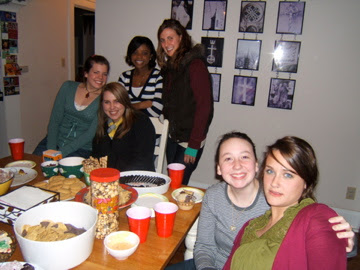 Some of the girls! Again, I can not believe this group is in college! 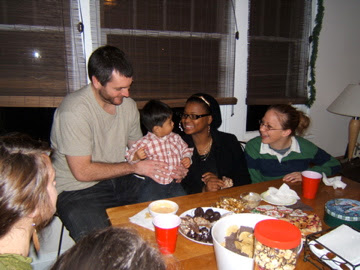 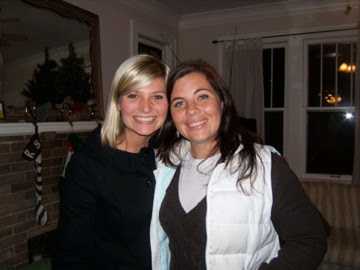 Jessica Busse was able to join us on her trip home from Honduras. She lives there now (check the link to her blog from our page)as a missionary and was a youth worker alongside us with this group of kids. 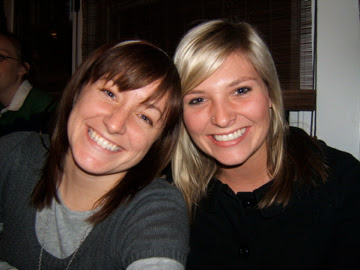 Lauren was home from Texas and is a great MadGab reader if you ever need one! 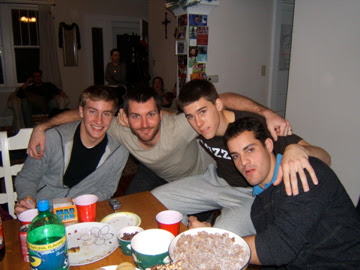 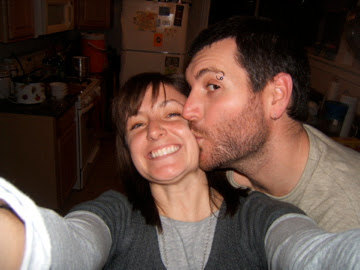 Just for fun! Mainly to gross out the kids... 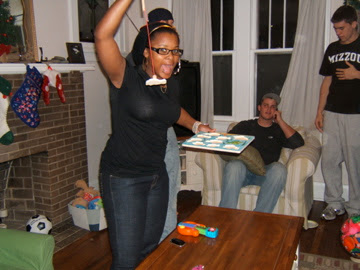 Mary spent a lot of time getting all the fish safely out of their pond. Job well done, Mary! 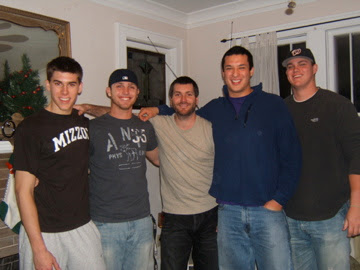 This picture just makes me laugh. These were Russ's junior high guys that were shorter than me when this all started. Now they make Russ look short! Eliot's eyes get so big when he's around them! He's intrigued with the giant people and they have become his b-ball buddies.
Posted by Katie at 9:36 AM

Katie, so cute! I had a great time so thanks for throwing the party and inviting me :) I would like you and Russ to know that I have started an annual tradition as well... it is called my 30th birthday. This year will be my 2nd annual 30th birthday.

That's so funny because I'm ALSO having my second annual 30th birthday! I'm glad someone else feels the same way. :)

Okay, my husband just told me that I lied...it's only the 1st anniversary...I'm aging myself WAY too fast.