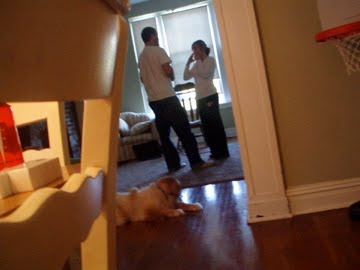 Remember this shot Eliot took? Over a month ago?

Well, here's the deal: Russ was helping me learn how to use my nasal spray. Judge me if you will, but the last time I took nasal spray I passed out. Don't ask. Some basic life skills have passed right over me, ask my SIL about teaching me how to make coffee.

I was taking nasal spray in order to save my marriage. Ya know how old couples get super irritated with each other when one spouse has lost their hearing? Well, apparently that happens to young couples (33 is the new 23) as well. For some time now, I've had a hard time hearing. Not just at home, admittedly, since they were starting to make fun of me at work about it, too. Good thing I can't hear them.

Since I had to get a physical for the Fostering stuff anyway, I was given strict orders to tell the doctor that I can't hear. He recommended I go see an ENT doc and that I may have some fluid behind my ears. Then my teeth started hurting. Aha! [self-diagnosed] Sinuses, of course! With the upcoming trip to Guate, I wanted to prevent my head from exploding on the flight. Safety first, people. So off to the ENT I go.

I've never been to an ENT before and it's always surprising to me to be in a doc's office and not see posters of ovaries everywhere. Anyone else have that problem? No? Mmmkay.

So, last week I head in and meet Doc 1. He checks all the basics and recommends the Audiologist do some tests. I walk through the office to Doc 2, who proceeds to do some extensive hearing tests on me including a few in a Dharma Initiative type enclosed room with a woman's voice saying things repeatedly into my ears until I decide to hunt wild boar in the woods while looking for electromagnetism.

After all the tests, Doc 1 comes back in holding the test results, pulls a stool up to my chair, takes a deep breath and says, "I'm not sure how to put this." oh crap. Then he says,"How much Dairy do you eat?" just kidding. He really said, "You don't have anything in your allergies/sinuses areas. Not a thing. Also, not only is nothing wrong with your hearing, it's exceptional. It's in the top 5% of hearing abilities."

Have I mentioned before that doctors have told Russ he has "fighter pilot vision"? No lie. We're the freakin' Incredibles! Only with smaller hips. 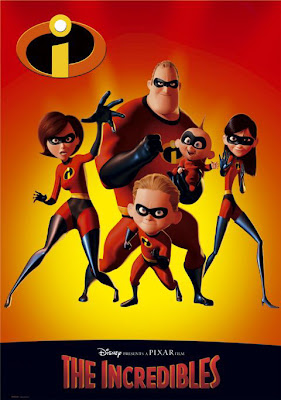 So, what does that mean for my hearing loss vs. supersonic hearing? My husband apparently needs speech therapy for all the mumbling. (just kidding, honey, you're amazing. and hot. oh, look, baseball's on tv!)

And the doctor *might* have said I have too much going on in my head and can't focus long enough on one thing to process all that I'm hearing. Too much going on? Whatever do you mean? (hammerdrop)

So, coming this June? A less busy-minded me. Any ideas on how to make that happen would be spectacular. You don't have to write it, just think it and I'll hear you.

p.s. if you're still reading...I also went to the dentist and they solved my teeth problem but not before the assistant poking around in my gums with a sharp metal object says, "Does that hurt?" really? Do you hear yourself, woman?
Posted by Katie at 1:20 PM

Katie, I can always count on you for a good laugh. I hear you (get it!!) on the weirdness of seeing things on doctors' walls other than ovaries and fallopian tubes. Damon also told me recently that I am hard of hearing but the ENT said otherwise. :) I have to say I am very curious to hear the passing out from nasal spray story. Not laughing. Just curious.

I love you, Katie. That just made my bad day...not so bad!
p.s.
sneak into my blog account and write a few blog posts for me will ya?

Yeah thanks for cheering me up today!!! Your blog can always do that :-)

Haha!! Muy chistosa! I also canNOT stand nasal sprays - they send me into a sneezing fit! But I was told by another nasal spray scaredy cat that those NetiPots work pretty well and don't hurt, so I tried and I liked it! Works great if you ever do get sinus drainage!

P.S. I knew you had supersonic hearing cause you used to hear me come in super late when I tiptoed past everyone's rooms in Spanish House at GC (late night study sessions!) :)

After years of my family telling me I can't hear, I am now going to use your story as defense. THEY are mumbling...THAT is the problem. Love it....
Leslie