I thought about saving this post for the conclusion of all the "here's 8000 pics of guate!" posts but I think it's my starter instead. 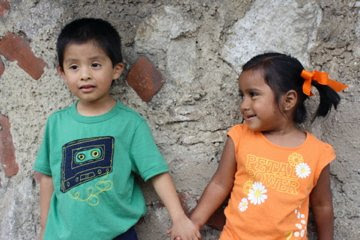 At the children's hospital one afternoon, Madi (Melissa's daughter) was running around. Russ had taken Eliot back to the hotel to take a nap and we’d already fed the kids lunch. Earlier that day I’d seen Madi yell at a little special needs boy for taking her toy away, getting into a little tug-o-war for something. Going from crib to crib, she stopped me and asked me to pick her up to see a crying little boy. She immediately grabbed the handle that is used to release and open the crib. It made me laugh that she knew exactly how these cribs worked, knowing it had taken my team a couple days to figure it out. As soon as I pulled the side down she began to rub the little boy’s head and console him. Once he settled, she was off to hop on a tricycle and play chase with one of the other little guys.

This hospital is easily one of the most disturbing places I’ve ever been. It’s a lot to handle, a lot to process. Many of these “kids” that we loved on are older than they look, some are even my age. The majority can’t feed themselves and all of them wear a makeshift diaper, no matter the age. The ratio of patients to staff is unbalanced and unfair to both parties. Most people I bring here need to debrief after what they’ve seen there*** 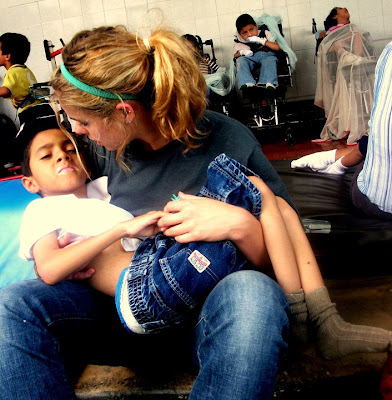 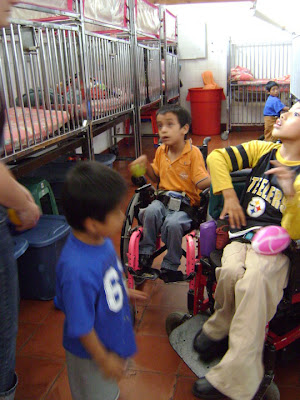 And yet, this 4 year old acted like this was just another Thursday afternoon. She had no inhibitions with these kids. She laughed with them, comforted them and even fought with them just like she would any other playmate.

I shook my head and thought “kudos to Mel’s parenting, although if we lived here, surely we’d be the same way. In fact, she’s lucky to have such an amazing place to serve so handy.”

Because there’s no special needs kids in St. Louis?

And as one of my girls said, “hey, don’t you live a few blocks away from a children’s hospital?”

At this rate, Eliot will grow up to think (as so many of us do) that serving is for big elaborate trips. In order to really do it right, you have to have a passport.

Why have I not thought of all this before now? As I forced self-reflection on my girls before we returned to the States, I wondered what my take-home would be from a trip like this? Was I really hoping that Eliot would grow comfortable with people that are different just by chance? Was I hoping to instill a servants heart in him by taking a once a year experience? This, just like every aspect of parenting, has to be intentional.

I hesitated in posting this entry until I’d already logged a few hours somewhere local but I need accountability. I need to put myself out there in hopes that as life happens, I’ll be obedient to what I’ve learned.

So, it's out there now. Published.

****By the way, don't mis-hear me. We LOVE LOVE LOVE visiting this hospital. We admire the staff for their hard work and we couldn't love those kids any more.
Posted by Katie at 3:40 PM

So, I've been reading your blog for awhile (I'm friends with the Vanzants and met Melissa while in Guate last summer), but am very comment shy. I have to finally comment because our family went through a similar experience a few years ago. We went to Mexico to build houses and while we didn't have some amazing emotional experience, we did walk away with 2 souvenirs. One, we were obedient to God and His calling to love others and it's ok if that's all that we get out of a serve experience. And, two, we shouldn't be only going to Mexico to serve. We've got to center our everyday lives around serving God and serving others. Those realizations started our family on a crazy journey that we're still experiencing and loving! Also, I love your blog and I love Guatemala!

You are an amazing person and some times we don't see the simplest things until shown to us in the simplest ways (the most obvious being through a child's eyes). Taking the trip is exceptional and that you have used it to be the basis to helping those closer to home is even more exceptional. many people would go and do their part and feel they had done something great and stop there but you are doing so much more!! God Bless you !!! you are a truly exceptional person surrounded by exceptional people and family! Once again God bless you!we are blessed to know you

You are not alone! As I landed in Korea I considered the huge blessing/responsibility God had given me to serve at the end of the earth. But, after six weeks He opened my eyes to the huge privilege of being an "at-home" missionary. Close to family friends, a church that speaks your language and food that actually digest the way its supposed too? What a huge blessing! I'm not mature enough to understand all the parental heaviness that comes with raising a child to love the unlovely but I will be praying for some 'Mohr' opportunities here in StL-Shoot, I'm currently trying to find a place to serve and call home here too! Love you and lunch soon!

so true. We build up so many walls in our "normal lives." It can be terrifying to let God tear them down.

Thank you for allowing the Lord to use your words to convict me. We will be serving in Columbus, IN ASAP.