I can't presume you remember my consolation red shoes from this postin 2007, so I'll just link it.

If you're new here, we had run into a record breaking amount of kick-outs from the Guatemalan government on Eliot's case. We were told very clearly (but unofficially) that we had finally been approved and were awaiting the official call "any day now." I went into the city with the girls in hopes of feeling kinda normal for a day. You can read it for yourself but my happy take-away from the day was this pair of red flats: 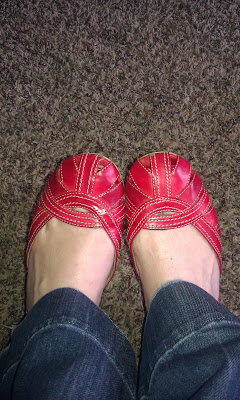 I remember coming home after this fun day out and thinking, "I'll just check my email real quick before dinner in case they emailed the final approval instead of calling."

That's when I saw it. There was indeed an email but it was the opposite of what we'd been told. We had another kick-out. I was devastated. Like, ugly-cry-can't-breathe-devastated. My flats became a sort of security blanket.

I readily admit I have issues. Especially with clothes. =/ 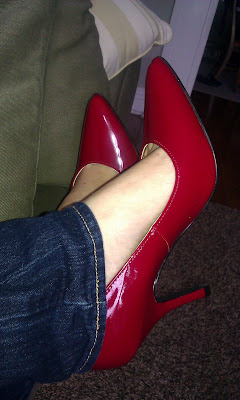 Yes, I am clinging to Jesus and His promises to cope with all that is going on, I'm just doing it while wearing these.

Speaking of weird coping strategies, you'll be happy to know that the doctor mentioned in this post has been making house calls via generous friends giving of their own stash...

"Greater love has no one than this, that he lay down his thin mints for his friends." Isn't that how John 15:13 goes? It's a little fuzzy.
Posted by Katie at 2:37 PM

Put down the Thin Mints my sweet friend with WAY HOT shoes! The whole family is praying for you guys and sending hugs from Clarkston (or Drayton Heights if you want to go old-school). You are loved!

Wish I could offer more, but know you are in my thoughts and prayers and virtual {{{hugs}}}.

Girl, those are HAWT shoes. (Did I spell that right?)

Love the red shoes... so sorry to hear the news. Hang in there!
Emily

Hot red shoes always make life a little better. As do cookies. And soap operas, or old episodes of TV shows like Boy Meets World or Blossom on Youtube. Hang in there. Praying for you.