I finally had some time to myself. While attempting to clear out the DVR, I rolled my eyes that Dez was still awake in the other room. Sighing, I filled the baby tylenol syringe hastily, grabbed some fresh milk and thought, "Make it fast, kid, I have stuff to do."

He was standing in his crib crying. At first glance I assumed it was his new teeth trying to come to the New Tooth Party (that's a real thing?), so I quickly gave him the medicine and scooped him up to give him milk to wash the meds down. He drank some but pushed the cup away and immediately snuggled into my shoulder.

He was so peaceful, so sweet that I gave in and walked quietly over to the rocking chair we got as a wedding gift. He didn't get fidgety like he normally would, but seemed to settle in with a big sigh.

This was a rare moment and I wished so badly to have a picture or video of it. That's my immediate reaction to anything I want to remember. I thought of Mary treasuring things in her heart and wondered how she really did that. I'm so dependent on photos, blog entries, and video.

His breathing deepened and each blink seemed to last a bit longer than the last. We sleep-trained him so well, it's been months since he fell asleep with anyone holding him. He's never this still. Never this content to be so still.

Rocking him to sleep brought up a strong feeling from last summer. For a month, that's all I did with him at the residential facility during visiting hours. Hold him, rocking back and forth, listening to him breath. Except last summer I spent that time wondering what would happen with us, with him. Having sometimes gentle, sometimes aggressive conversations in my head with God. I so wanted this baby. 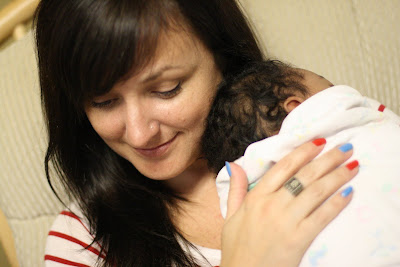 I know better than to bargain with God, making promises if He comes through on something. But I also felt so fragile from the previous few months that I found myself scared of wanting him so badly.

Desmond broke my stream of consciousness by sighing deeply. I looked down and realized he'd been staring at me. I squinted my eyes, looked hard through that perfect squishy toddler face to find the tiny infant face I remembered so well and said, "It worked out for us this time, Dez, we get to keep you forever." He started some giggles while I wiped away my own tears.

This might sound odd, but more than not, I forget that our boys are adopted. They are just my boys, plain and simple...and oh-so-complex.

I forget ours are adopted too. Heck, I forget our two Littles are still fosters!

Dear Katie--I just shared you on Facebook--hope you don't mind. I loved reading about Eliot, too. Blessings, Friend!

As far as your last paragraph goes...that's the beauty of adoption. I know my mom feels the same way. And the really beautiful thing is that they won't remember they're adopted most of the time either. They're just going to be "your boys" and you will just be Mom...plain and simple and not complex at all. In fact, they won't remember anything about any of the complexities...they'll just be your boys and that's all they'll ever remember. Beautiful, indeed.