Counting Down to Monday...

Russ here. I know, I know, it's been awhile.

Not too many people get excited for Mondays. But Monday can be a great day of the week. Penn Station offers by-one-get-one sandwich free (or "BOGO," as Katie would say) on Mondays. Tony's BBQ has all you can eat on Mondays. Ice & Fuel has 1/2 price wings on Mondays. Mike Duffy's even has free beer on Monday nights! Oh, and after weekends away with the band, Mondays are mine and Eliot's day to kick mom back out of the house for some guy time. 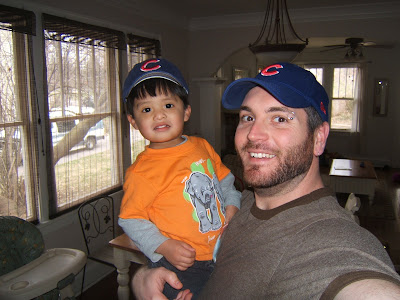 This Monday is Opening Day for the 2008 baseball season. The Mohr boys are very excited. Also known to Cubs fans as "next year." [And before you go typing comments, trying to be funny, making Cubs jokes, please beware that you're dealing with a lifelong die-hard Cubbie fan here. No amount of your cute little Cardinal humor or sarcasm could ever penetrate my super-thick, heavy-duty Cub fan armor. Take your best shot.] This is our year. 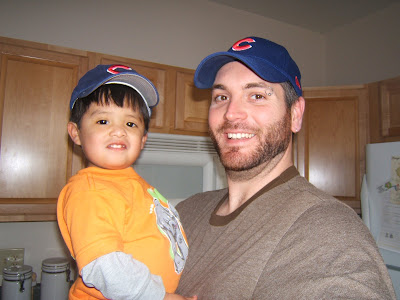 The funniest part for me is knowing that as far as Eliot is concerned, the Cubs are always among the best teams in the National League. After all, shortly after he moved to the States, the Cubs won the National League Central and made the playoffs during his first October as a US citizen. As far as he knows, the Cubs are in the playoffs every year (and the Cardinals are not)!!!! And that kind of naive optimism is exactly why he is primed to be the perfect Cubs fan. Katie's already got him saying "Go Cubs!" 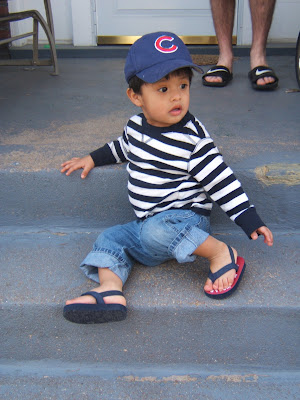 But that's not the point. The point is, it's almost baseball season. It's March Madness. It's spring! The best time of year. No matter who you cheer for, first or last place, baseball is the best. Opening Day! Only October is as great (esp. when the Cubbies get to play!) We overheard a little boy (maybe 10 yrs old) the other day trash talking with his dad about his NCAA tourney brackets and Katie smiled and reminded me that some day Eliot and I will be able to have funny little conversations like that. That is so awesome. 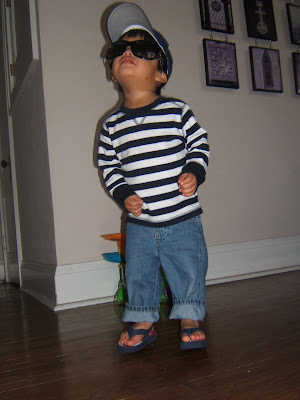 I'm excited. It's the absolute greatest time of year, and now I've got a little buddy to enjoy it with!!!! 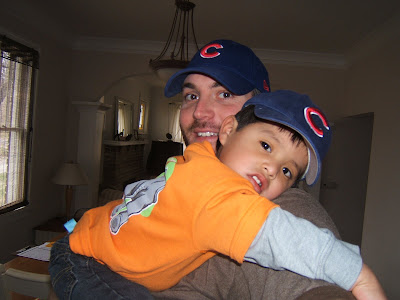 He looks AMAZING in that CUBS hat!!! I am glad to see you are bringing him up right.

Nice try but we all know that Football season is where it's really at. I guess will probably like baseball more though. I mean it is a South American sport now after all.

Fisher has the exact same shirt from the zoo!! That must mean we need to get the boys together for a trip to the zoo!! ;-)

I can forgive you for being a Cubs fan because he's just so darn cute in that little cap! And that's a really great dedication to the beauty of the baseball season -- WHICH BEGINS SOOOOO SOON!!!! CanNOT wait! See you at the stadium!

Major Cubs fans at our house, too. DH is actually in Phoenix on business and spent the day watching the Cubs play the Angels - he says the "business" trip was not planned around the game - I don't believe him!!! :) This year... maybe

Cubs or Cardinals? I'm not sure either is the best. Of course, I don't think baseball is the best - a Nascar Fan and NFL fan speaking here. However, Eliot is awfully cute in the hat, so maybe it's okay. (Russ you don't look so bad either, maybe the Cubs would like to have you guys as funs.)

DORKS! That said I love me some baseball and the Mohr family.

Thought I would point out that the Cubs are currently in last place. Shocking...