So, I mentioned in my previous post that one of the joys of not working full-time is being able to enjoy little things with Eliot. Well, he's at a stage where every day presents an opportunity for him to show off something he knows how to say/do that he didn't have in his repertoire previously. Yesterday he showed us that he could, in fact, dribble a ball. The refs are still reviewing the tapes to see who actually taught him that, Coach Danger-Russ or Coach Special-K. Not sure we'll have a conclusive answer on that any time soon.

Yesterday afternoon Eliot was carrying a tupperware lid as though it were a tray like a waiter would. So, when he offered it to me, I gladly took it and began to fake eat the invisible food. He was quite delighted in this new game and we took turns for quite a while fake eating. Then at one point, he stopped his "chewing" and put the plate on the floor, folded his hands, said, "Pray" and bowed his head. So, we gave thanks for our imaginary meal, said, "Amen" and continued eating. He generously offered his imaginary food to Daisy, Russ, Jack (the yorkie) and even to a picture of our friend Mike. 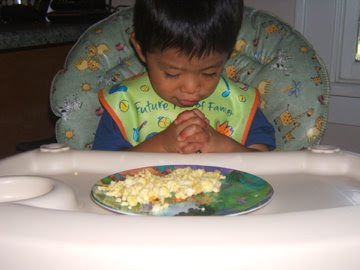 These stories are always cute and I'm always excited to blog about them so we can be able to look back in a few years or even months and see the progression of his skills and personality. But as a mom, I begin to wonder what's ahead. What clues do we have now of who E-man will be? Was this spontaneous commitment to giving thanks a sign of a child who naturally has a heart of gratitude in life? I hope so. I guess there's also a point where our parenting/guiding stops and his natural personality steps in. I can't wait to see how that all plays out. When little things like that happen, I think back to a couple blog entries by my friend Chrissy who has four boys. She posted four separate blogs about her 4 boys and each of them I found to be so interesting that I keep going back to them. There's E, and J, , and E,, and her oldest, N. If you can't see, I added the link to each of those blogs to their letter.
Posted by Katie at 8:21 AM

love the story about Eliot..the imaginary food and stopping to pray, too cute. It is amazing to see their little personalities develop.

Also, thanks for sharing the posts about your friends 4 little boys. If Lance wasn't sitting so close, I would be bawling my eyes out...instead there are just little tears (he would think I was a big freak if I was crying after reading someone's blog that I don't even know). It was just so cool and encouraging to see a mother of 4 know her children so well. I struggle with just trying to understand what caleb is saying and why luke poops 8 times a day (seriously). :)

This is the absolute cutest picture ever Katie! You and Russ have done such an amazing job with E. It is so amazing how God has brought you three together and created this wonderful family. Love you!