It's time. I've been living a secret life. I can hide it no longer. Here is the raw truth:

I'm in a hot-n-heavy relationship with a graphic designer. I have been for months.

If you hadn't figured it out after the long waiting period of teaser blogs, our big news is that Russ started a graphic design business. And I mean, graphic. (not really, but would that be weird for you? It would be for me.) It's called Art in Stereo.

Russ has been hired/contracted out, whatever, by several different people over the last year and especially in the last few months to service their graphic design needs. And he's good. I'd hire him.

He's been so busy with clients that he's not had much time to compile all he needs for his website. It's almost up and running and was much closer before the hard drive crashed. BUT the amazing news is that we found out yesterday that his hard drive is 100% recoverable! It will be returned to him by middle of next week. Can you even believe it? I couldn't, I'm so excited! It took a "donor" part of a different hard drive and a few days of file something-or-other and WA-LAH!

So, that's the big news, the news you've been so patient to hear. I was waiting on his website but I've made you wait too long. Once it's up and running I'll announce that and you can check out his amazing skillz that pay our billz. 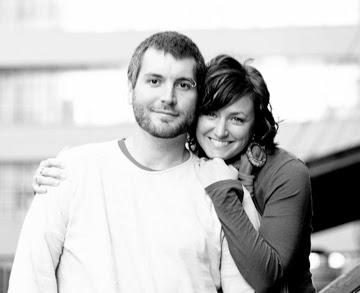 SO glad to hear about the hard drive! That is amazing! And can't wait to see the website!

Congrats...how exciting!!! Love the 'Urban photo shoot' it's very you. Eliot is the cutest Batman ever!!!!!!

Awesome!! Congratulations on your new biz. And what a relief about your hard drive!! Hugs, Heather

Wow Katie you look gorgeous and Russ isn't so bad himself! God's blessings on the new bizz. Much love, Tina

Awesome! Congrats to Russ. I can't wait to see the website!