I guess I'm just posting to give you something to read that confirms your suspicions. We haven't heard any news yet but are expecting it any day now. We're more than ready for the day that we don't wake up asking the question, "Is today the day?!" To be honest, each day that passes makes the next one harder. It seems that the closer you get to what you want, the further it feels. It also doesn't help that today marks 5 months being in Guatemala!

Meanwhile, back at the ranch...(do people still say that? did they ever?) Eliot is almost over his chicken pox! He is such a good baby when it comes to being sick. He's as silly as ever and actually popped out two more teeth in the past week! He's pulling himself up as much as allowed around the house and is obsessed with trying to stand on his own. 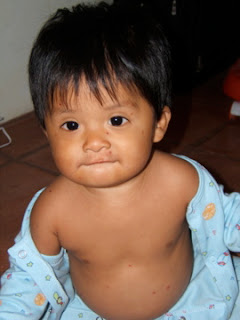 Again, thank you for the emails of encouragement and your prayers! I'll update again as soon as we hear anything!
Posted by Katie at 9:05 PM