What would I have missed? 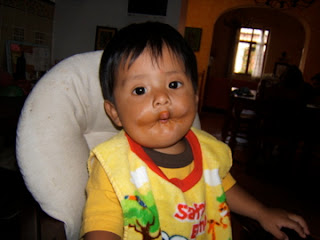 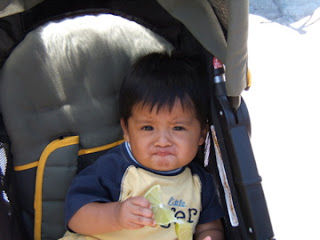 There are many moments that my attitude about having to be 'stuck' here could be compared to a childhood tantrum. But each day I think of the alternative. I would be missing out on all of Eliot's little quarks during this time of his life while waiting for the Guatemalan government. The reason Russ and I felt led to send me here was so that we wouldn't keep missing those things, little or big. It seems to be the days that I'm the most frustrated w/ our paperwork process that Eliot does something new and cute, and I, his mom, get to see it first! I'm the one who gets to see his fishy face, his half-eye when he eats something sour. I'm the one who gets to wipe the massive drool off my chin because he's learning to 'kiss', the one to see his little hands shake from excitement because he pulled himself up to a standing position. Not to mention the two new arrivals (his first two teeth) that have made him so fussy all day! I'm the one, not some lady in Guatemala City.

If you've kept up w/ my entries, you know that this past week and a half, we had Nana here. Now, everyone knows how babies are w/ Grandmas. The only other person that I've seen Eliot take to so quickly was Russ. Eliot was giving Nana kisses and sitting in her lap before we even made it into Antigua from the airport. However, there were several times that even the super-nana powers of comfort or touch weren't what Eliot wanted. He wanted his mom, me! I think of what most adoptive parents have to do to bring their child home, usually after meeting their child for only a couple of days. If we would have done that (which was our original plan) rather than send me here to live for an extended amount of time and Russ to visit as often as possible, Eliot wouldn't have really known me as his security/comfort. He wouldn't have spent months learning that hiding in my neck and pulling on my hair will help him fall asleep.

There's all kinds of examples of his cuteness that I could share but naptime is almost over. I can't wait until you each get to see the little man for yourselves!!
Posted by Katie at 7:26 PM

Katie, I have tears running down my face as I read your blog entry. I pray for you guys everynight as I put Caleb down for bed. I know you are so ready to be home but I am excited that you get to be with Eliot. Now that I have your blog address, I'll check it often!! Hang in there. love, Heather

That's awesome Katie. My parents were divorced, and one of the few positive aspects that came out of it were that my parents appreciated the gift of children more than maybe some may have otherwise. You and Russ have (in many ways) been greatly blessed by this ordeal!

I do not mean to minimize your situation or mean to say it has not been a daily struggle, but I'm ridiculously happy to hear that you can see God's blessings in the suffering. Seriously. Hannah and I are both really happy for you, Russ and Elliot!

I am so happy for you that you get to be with Eliot for all of these small moments. Motherhood is such a blessing, as I'm sure you already know. Ali just turned three last Wednesday, so she still gets pretty excited with new things..and it seems she learns something new everyday. Cherish them when they are little...they grow up so fast! We are praying for you! Miss you!!

You are so awesome!! I truly admire your strength through all of this, and am so happy that you have been the one to watch Eliot grow and be his comfort. Can't wait to see you again...give Eliot a big hug from me, and when Fisher gets to see you again (and meet Eliot), he will also pull your hair to give you kisses!
-take care-Heather

I cried while reading this blog...I know that comes as a BIG SHOCK to you!!! I love you and miss you terribly. I am so glad that you are having this time with Eliot!!! It is going to make it so much easier when you get to bring him home!!! Give El kisses from Aunt Manda!!! Love you both so much!!!

I sat down to read your blog and my little man climed up on my lap to sit with me. He was touching everything and getting into everything and I was starting to get frustrated. Then I read this! With tears streaming down my face I kissed him and told him how much I love him. These moments are so precious and they go by too fast! I pray for you and your family and praise God that you get to be there for those moments. You will never forget them!

Katie, Erin Miller has kept us "in the loop" with you guys! I just read this and have tears rolling down my face! You are his mom, what an awesome revelation!!!! I pray daily for you guys. I hope you are all home soon.