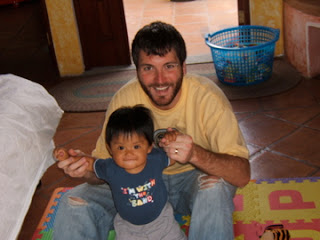 Well, Russ left yesterday morning. I've gotten a few emails saying things like, "how are you now that Russ is gone?" or "I prayed for you all day, knowing Russ was leaving." So, how am I? Well, frankly, it sucks that he left. However, one thing I've learned in being the only care-giver to my child is that a cranky mom creates a cranky baby. So, my choices are to wallow in my self-pity and deal w/ Senor Fussypants or take on a new perspective. So, here's the new perspective: I'm over-the-top blessed. How freaking great is my husband? How amazing was it that he got to come down here for another week? How awesome was it for he and for Eliot? I'm (we're) so blessed! Am I tempted to get caught up in the self-pity, absolutely. That's where I realize that all those prayers, the ones I know about and the ones that are kept private, have come into play. A couple people have mentioned, whether they were supposed to or not, that they have a "shift" covered of when to pray for me. Apparently there was a sign-up sheet of some sort passed around by a certain Marge Marge asking people to take shifts of each day to commit to pray for us. Some people are even committed to fasting! What an amazing cloud of blessings surrounding us each day! We are being prayed for around the clock, day in and day out. On top of that miracle, I keep getting random emails that all start the same, "you don't know me but ___ has been keeping me updated on what's going on and I just wanted you to know that I've been praying for you and so has my..." It really hasn't stopped flowing! I can honestly say I've NEVER been lifted in prayer this much ever before.

Some Eliot updates: During the week that Russ was here, Eliot made some great strides. He seemed to develop a little bit more each day. He learned to high-five, how to say "yep" and nod his head yes, how to pull himself up all by himself, and he even finally cut his first tooth. While these may seem small and non-monumental to you, they're a big deal for a little guy who hasn't really been doing anything new in weeks. It just makes me wonder how fast he'll develop once we're together all as a family for real, not just visits. I think that's why he won't crawl, he's protesting until we're a family unit! 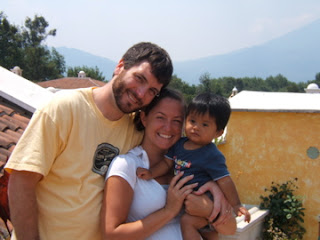 Some Case Updates: We're now at the 6 week mark of being back in PGN. Most cases get approved w/in 6-8 weeks of being back in, so we could hear any day now. They're a little behind because of Holy Week, but it's getting close. Once we get that approval, Eliot is ours as far as Guatemala is concerned. After that, it's just a matter of weeks while we take care of all the immigration stuff for the US Embassy in order to bring him home w/ out climbing a wall from Mexico.

Sorry if this ended up being on the heavy side of "God is so good", I kinda can't help it.
Posted by Katie at 7:28 PM

we're so hppy to hold up your hnds...

Katie, My prayer today is that this Friday the 13th would be a great day for you. God is faithful. Soon these long months apart will be a distant memory. May God richly bless you in your pseudo-home! :)

How amazing is Margie for the prayer/fasting calendar. She told me about it when I went home a few weeks ago and what a blessing is it to take a few hours to just fast and pray for you guys. The power of prayer and fasting is so great; it’s such a humbling experience to know that Christ hears our prayers. Isn't he good, isn't he kind. How great is our Savior.

God IS so good, and it is great that you are grabbing onto the 'new perspective'. We are praying and praying sand praying here..you know, that somehow those papers will find themselves going from desk to desk and falling under the right pen!!?? HA..but seriously, that God will keep you safe and well while you are learning all the things He evidently needs you to learn down there to be the best Mom ever for Eliot! LOTS of hugs all round!

Katie - just want to say that I am thinking of you and Eliot all the time. Glad to hear about all the milestones he has reached this past week and you are right - that first tooth is huge. Hope you get out of PGN soon as you have waited long enough. You are in my prayers.

I love this blog. Thanks for publishing it... I've been praying for you and Russ and El too.

As always, I love reading your blog and the pictures are precious. We pray for and think about you guys often!!! love ya, Heather, Lance and Caleb

Hi Katie, this is Jenni (Ferrell) Barnhart. My Mom has been keeping me updated on you and your son's progress, and I have started checking out your blog. I am at a loss for words as to what to say, but mostly I just want to say that you are my hero. I pray that God continues to give you the strength that you need and deserve. Good luck, come home soon, Jennifer.

i freakin love you. nothing deep or spiritual, just love your freaking guts out. if you didnt know already.