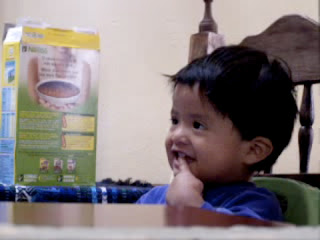 Well, it's over. Eliot got fingerprinted today at the passport office. He will now have to cease his incessant life of crime he's been living behind the scenes. But seriously, could there be anything cuter than 1. Eliot's passport picture or 2. Eliot's little fingerprints? I mean, it's ridiculous!

Okay, so what now? Our file will be submitted at the U.S. Embassy tomorrow and we will wait until Monday to hear when our final Visa appointment is. The appointment will probably be about 2 weeks later. We're trying to get it moved up but don't know what will happen. Sometimes they are very flexible but other times not. Pray that our case finds favor with whoever answers the phone!

It's fun to think that I'll be driving Eliot to the St. Louis Zoo in a few weeks after a quick stop at Bread Co.! Unreal!
Posted by Katie at 2:05 PM

How exciting! Wow, after a year..they sure move things along quick when they finally decide to...

Still prayin', along with lots and lots of other people..for a fast resolve....

YEAH!!! I am so excited about coming to STL for a visit really soon and taking on of those drives with you!!!

We'll pray that they will move it up and you'll all be home in a little while! Miss you!

YAY!!! Such a fun and exciting day for you all. Still praying for you.

Oh, and I love the picture.

that's right, sucka. one last thing on the checklist and you are COMING HOME!

seriously, is there anything cuter than that picture right there? makes me wish coming in and sitting next to him for meals when he would get all excited and point at me. so freakin' cute. great pic, great kid.

when you are on your way to the zoo...call me! Toby and I will meet you at bread co and then hang at the zoo with you!

I am sure it will take a while for your new reality to sink in. BUT once it does and all of the Eliot Fan Club gets their much awaited time...maybe Eliot can make some new friends. I have two boys that would love to meet him. Oh and it would be cool for us adoptive parents to hang out too I guess. :)