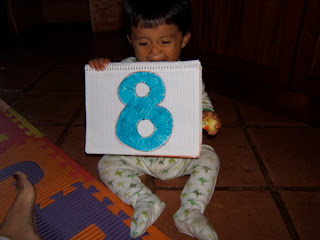 As we only have 8 more days here and our last day will be spent in the city, we have one full week left! I will probably be taking too many pictures, eating at all my favorite restaurants, trying to spend as much time with my Antigua friends as possible and squeezing in some packing. This is all very surreal still! I know people do actually go home, I've watched waves and waves of them come and go. It's just odd that it's really happening to us!

Eliot update:
*He now says five words: in order of which was said first: Dada, Mama, Ball, Duck, and Hippo.
*He's standing on his own without holding onto furniture. I keep putting him back down so that he doesn't take his first steps without Russ around! Just 8 days left of being a bad mom!
*He's obsessed with growling. We were in a very crowded elevator this week in the city and it was dead silent. Eliot took that opportunity to growl quite loudly at the man standing behind us. So proud. Thankfully everyone laughed so I told the man that my son thinks he's a lion.
*We went to the Embassy doctor this week and got medical clearance for El to come to the U.S. He's up to a little over 20lbs and some where between 76-79 centimeters tall. (different doctors got different measurements?)
*This week he started putting different sized blocks inside of each other. There's a set of blocks that can fit inside each other or stack up. He's been making little towers to knock down but this week he began fitting them all inside each other. My landlord said that's a sign of a high IQ. I told her that he gets that from me.
*I'm pretty sure his eyes got browner and bigger.
*On his own, without anyone showing him how, he starting throwing the ball into his toy basket. He's been playing catch and throwing the ball to me (or out the door to watch mom run to get it...) but out of nowhere, he's obsessed with throwing it back into the toybin. I guess he's getting ready to play hoops w/ the boys in the neighborhood. 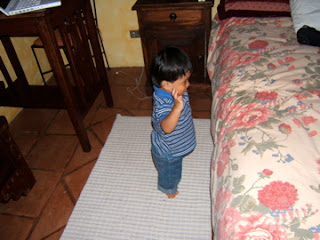 Case update:
* Our embassy appointment is tomorrow morning. After the appointment we're going to meet back up with his original foster mom who took care of him for the first 6 months. She hasn't seen him since November!
*On Tuesday afternoon our Visa will be ready!
Posted by Katie at 5:08 AM

This is all so exciting...and I must say this all seems kind of surreal to me too that you guys are actually getting ready to come home!!! Hope you guys have fun hanging out with Ms. Hazel (isn't that his foster mom's name?). I will be hanging out with the two of you 2 WEEKS FROM TODAY!!!!!! I can't wait!!!!

hope you have a great Embassy appointment.. can't wait to hear all about it! Still love the lion story -- El is getting soo big!

What an exciting week you have in store! You are not being a bad mommy at all. I would be prolonging the walking as long as possible, you will need Russ and his hands around once Eliot takes off!!!! Still praying everything goes smoothly and you are home in St. Louis soon.

Amanda,
I am in Share Group with your Mammaw Roberta at LEVY UMC. We have prayed for you, Russ and Eliot since the day we first saw his "little man" picture on Roberta's wall. Each week we meet, I look at him and just think what an awesome God, that he would pick you and Russ, and your family to bless with that beautiful child. We feel like you have been with us each week, but we KNOW that God has been with YOU through all this. Eliot is destined for great things. His journey has just begun. God Bless.