This time next week... 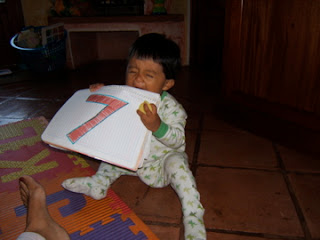 So this morning started out with me waking Eliot up at 5:00 to get into the van to go into the city. This is rare in that I've only had to wake Eliot up twice. He's not exactly into sleeping in. He took all of two seconds to decide that getting in the car in your pj's must be a special treat and was giggly (is that a word?) the whole way into town.

Everything at the embassy went smoothly and Eliot's application for his Visa was approved. Once we were in the tiny office, it took about 2-3 minutes total. That was it. Eliot made sure to wave at the man behind the glass the whole time, too. Eliot was several months older than the majority of children in the waiting room. All the other babies were so sweetly sitting still. Um...not Eliot. He was quite active and kept me on my toes. I'd tried not to be bothered that all of those cases must have gone rather smoothly for those small babies to be going home. Not that I don't want other cases to go well, just still shocked that we're still here. I will say that my face was void of the panic that was found on the majority of the other faces. Most of the families had only come for visits in the past and were still getting acquainted with their children. As soon as the baby would make a peep, you would see this instant exchange between the parents of "what now? what should we do?" I was thankful to know my child as well as I do. Can you imagine if I hadn't come to foster and Eliot was this old coming home? I would have been a nervous wreck this morning.

Sidenote: there was a form we had to fill out for Eliot that had boxes to check yes or no if he was apart of, or intended to be apart of the following: prostitution, carrying out severe violations of religious freedom, any sort of "trafficking", espionage, sabotage, affiliated with the communist party or Nazis. Any one of those by the age of 1 would have been quite a feat.

After the embassy we went to the Marriott to see Ms. Hazel one more time. She was Eliot's foster mom for the first 6 months. She was so surprised to see how big he was and how many teeth he had. She kept hugging him so tightly! Again, I was so very thankful that we were blessed to have her taking care of Eliot. Her daughter, who is seven years old, was so excited to see him and the feelings were mutual. Eliot kept giving her kisses and kept crawling around to chase her. It was a comfort to know that he still remembered them! 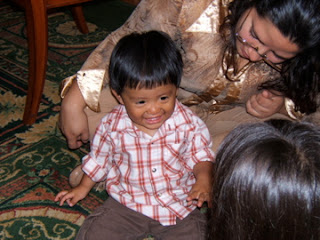 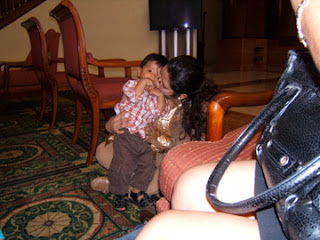 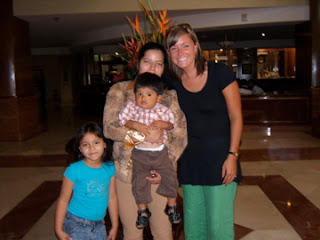 
Then we loaded ourselves back into the van to head to Immigration. I had to pay my "I've lived here longer than I should have" fee. So, that means, I'm no longer an illegal alien running through the streets. Guatemala gives you 90 days on a tourism visa. Once that 90 days is up, you can apply for another 90 days for a small fee. That extra 90 days ran out at the beginning of May. So, out came the wallet so that the people at the airport would let me go home next week.

I'm officially exhausted. Praise the Lord for so many things today! Thanks for getting so excited for us to come home! It adds to an already amazing feeling! By the way, if you're wanting to meet us at the airport, email me for details, not Russ. He's unable to check his email this week. My address is katielmohr@hotmail.com
Posted by Katie at 6:57 PM

katie, sounds like such an awesome day, i was thinking about you and praying that all would go well. btw, el looks way too cute in that little button-down shirt -- love it!!!!

HEY!!!!! WE ARE FINISHED! We stayed at a place here in N. Ireland last night that has a computer. I don't think this will be a regular thing, but since we didn't get to talk I got on here today to see if you'd posted. I'm so sad I missed the reunion w/ Hazel. That looked so sweet. I'm so excited and am celebrating wiht you today. BTW, it's 3:00am in Guatemala and Just had breakfast here. We're off to Giant's Causeway today. I miss yo uand will see you in less than a week! AGHAGHAGAHGAHAGHAGHGHAGH!!!!