For the last week, we've been in a funk. We received word that our close friend, Beth, lost her brother last week in Iraq. For a connection, Beth was the one who came to Guatemala twice to visit. She and her husband, Mike, are the leaders of the ministry called Damascus Road that we're apart of. More than ministry partners, they are our dear friends. 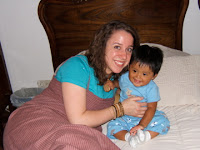 Up to this point, I haven't truly been personally affected by the war. I want to be careful how that comes across, as people are very sensitive about the whole issue, but it isn't hard to turn off the news and go about regular life. It's been going on so long and seems so far away that I even forget it's happening sometimes. I would even admit that I'm so obsessed with my own life that I can easily dismiss the war. I don't read the newspaper and rarely watch the news past the weather reports. Then we got a phone call.

For the rest of the morning I caught myself crying a lot. I would just get overwhelmed for Beth and it would start. I cannot even begin to imagine what she feels. To imagine the military car pulling up to her mom's house that morning letting them know the happenings of their only son or to imagine Beth lying on the ground as Mike shared the news brings tears instantly.

Many of us got together that night to pray for them and to brainstorm on how to support them in this while they were back east with family. As we prayed people confessed their anger at the war, at the government. For me, confusion is greater than anger in this situation. Especially after Beth saying that Erick used to frequently say things like, "Don't believe what you hear from the media, we're doing really good things here."

Rather than go into politics and sharing the emotional details of the last week, I'd rather try to honor Erick. Today is his funeral and since we couldn't be apart of it, I want to do something. The news stories only went as far as Pennsylvania so I want to at least spread his story a little further than that.

Beth's entire family was in St. Louis a few weeks ago while Erick was on leave and we got to meet them all. As we were being introduced to Erick he kept smiling at Eliot and kept saying how happy he was for us that we were finally home. What? Hi, You live in Iraq while I'm laying out in the Central American sun for a short time and you're turning the focus onto me? I mean, really? It was one of those conversations where you're so completely amazed by the person you're talking to because you know they have so much more going on in their life yet the entire conversation has gone by and all you've talked about is yourself. He just kept asking questions about the adoption process and living in Guatemala. Meanwhile, he's been at war. Sure, that time should be spent on me. Hmmmm.

While I won't pretend to know how the system of rankings go, I do know that Erick was in charge of a unit of men. He's high up enough to have two men at his side at all times (and at age 29? What?) He was also highly honored with an amazing collection of medals. Normally that might cause some pride or arrogance but on the contrary, Erick was extremely humbled and took the responsibility of his men very seriously. Here are some excerpts from the news articles in Pennsylvania over the last week.

*Robert Foster described his only son as "the best of the best" – telling Mary Robb Jackson that he was at "the tip of the sword in the pursuit of Al-Qaeda."

One of your questions might be, "how did he die?" Without dishonoring any of the deaths that happen in Iraq, I have to say that Erick's death was something to be amazed at. He was shot in action. Despite what anti-war/anti-Bush groups may say, there's legitimate action going on there daily. Erick was a part of those front lines and no doubt deserved every one of those medals they awarded him. I can't imagine the stories behind each one of them, as I know the military doesn't hand them out flippantly.

To reduce it down to a very basic, bottom line: Erick was in charge of getting the bad guys (the really bad guys) and he did it well. He is one of the many we can thank for our daily lives.
Posted by Katie at 7:01 AM

wow katie. i don't think any of us truly get what goes on over there. they are heroes! what can we do to make this time easier for beth and her family? -emh

We will be praying for the friends and family of Beth and Erikk....He is a hero

Katie, Thank you for sharing Erick's story. He was and will always be a hero.

Beth and Mike - We love you guys and are praying for your and your family daily. Erick will always be greatly appreciated for laying down his life for this country.

We are forever grateful to Erick and the others fighting everyday for us -- what an amazing guy!

thanks for sharing katie... what an incredible tragedy. you guys, along with beth's family will be in our prayers...

As the editor of a veteran's organization here in St. Louis, I am blessed with the forum to honor his memory. Check out the following article:

Katie,
Thank you for taking the time to honor Erick. You are right it is so easy to get wrapped up in our own lives here in the U.S. that we forget what those men are doing over there FOR US AND OUR FAMILY AND KIDS!! Many prayers to Beth and here family. I know the Lord will carry them through this time.Death is hard but what an honor to the family to know their son/brother died as a hero for our country.

Katie - A very moving tribute for a brave hero. You are all in our thoughts.

Lump in my throat for this family's profound loss, Erick's living testimony of "No greater love has any man than this, that he lay down his life for his friend" and your once again, beautiful writing that brings honor to your dear friends!! Thanks Katie!! Praying with you for this family!

Thank you Katie for this. It means more than you know. Love you!

Thank you for focusing on this amazing young man and the ultimate sacrifice he and his family paid to secure our freedom. We are humbled and grateful.

Katie,
Thank you for sharing his story. I cry for their family and for the misery of the war.

Katie,
I know several people who have been in Iraq, and they feel the same way that Erick did - what you see on TV is not the whole story! These men and women are over there defending us so that we can live the life we want here. They should be honored for their sacrafice and I think you did a great job doing just that!

Very nice memorial. Did you get a chance to find out from HIM when you had him there, at your fingertips, about what great good things they are doing in Iraq for those people?? I bet he had some stories..that were/would have been inspiring. If you did talk to him about THAT, then I bet you could share them with that group -- Im sure he wouldn't want people sitting around being mad about something he thought was worth risking his life for. He is a real hero!!!!!!! God bless our men and women in military -- we take them for granted tooo much!! And what they are doing for us.

My name is Captain Tony Cerella (U.S. Army). Erick Foster was one of my closest friends and my roommate for a few years at Fort Hood.

I'm sitting here at Fort Riley tonight thinking about him.....thank you for taking the time to honor his memory.

We miss you Erick.