How many times have I heard, "enjoy these times with your little one because they grow up faster than you think. Before you know it, they'll be off to college..." Well, it happened. Tuesday morning we loaded up the car and took Eliot to Mizzou. Since Eliot is teething, he decided to head back home instead of enrolling in classes. So we spent the day with my small group girls. It was a blessing to see them again since I'd only spent limited time with them since I've been home. I've been 'mentoring' these girls since they were in 8th grade so it's a blessing to see how they are growing up. It's odd, of course, to think that they used to need rides everywhere and had braces when they're now picking career paths and living independantly. I'm so proud of them! 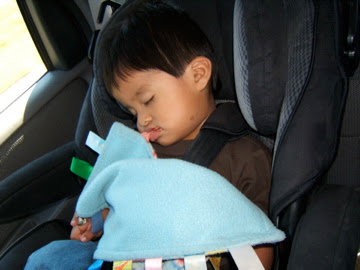 (On the way to Mizzou...isn't this how most kids look as they head to college?) 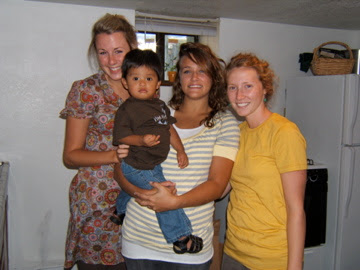 If you live in or around STL, you know that the weather has been insanely beautiful this week. It reminds me of the weather in Antigua, actually. Well, yesterday Eliot and I took advantage of our zoo membership and the sunny sky and met our friends, Nicole and AJ at the St. Louis Zoo. The animals also must have felt relief in the weather because they were crazy yesterday! We laughed a lot and the boys pointed and squeeled a lot! 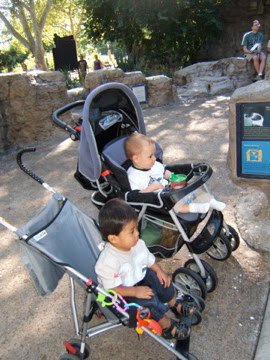 (The boys were talking to the penguins) 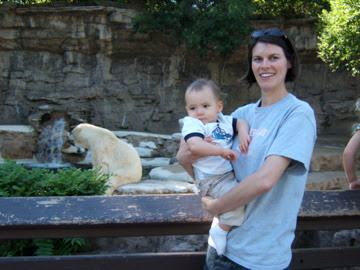 (Nicole and AJ and an unsuspecting polar bear) 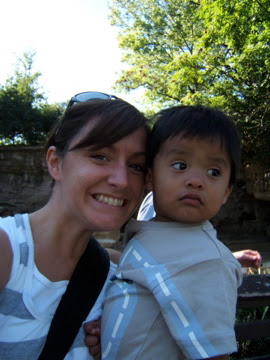 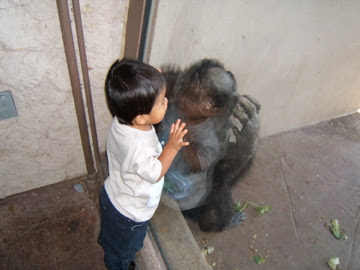 (Eliot making friends with a monkey he calls Daisy...weird...) 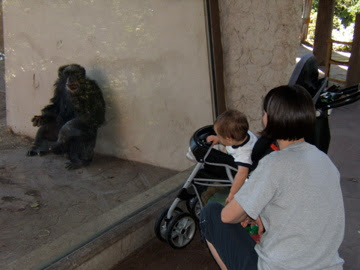 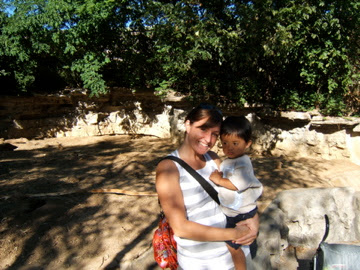 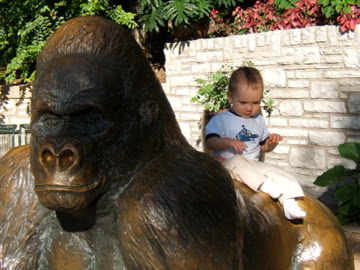 In other news, I haven't really updated anyone on "Project Eliot Walking". Many of you blog-followers know that he took steps over a month ago and because of our reaction, he decided it wasn't for him. Well, he had even quit standing on his own also. During our photo shoot with Jodie, he stood by himself for the first time in weeks. We kept a low profile but cheered him on. Then in Iowa over Labor Day weekend he took a few steps again between Russ and I. Then last week there was a night after dinner when he was acting like a complete spaz. He was crawl/running everywhere, tormenting the dogs, standing on his head every 5 seconds, etc. So, we decided to try and channel that energy into walking. We even tried to video it for you. He was so silly that he would walk but would then dramatically fall down and giggle to himself. The videos are useless because they really only show me laughing non-stop at my silly son. The next night we went to dinner at a friend's house and he got hyper again after dinner (I promise I'm not feeding him sugar!) so we tried again and he took 4-5 steps several times. The latest update is that last night Russ and I got on the floor with him again to see if he would walk and he repeatedly took between 7-12 steps between us!! He's so close!!! He even let go of me and took a few steps to get to the couch once! Hopefully soon we'll have a video for you!
Posted by Katie at 9:22 AM

I so wish I could be there to see it...but I did get to witness the first steps and all the screaming around the room that kept him from walking for awhile. Before we know it he will not only be walking but running in an attempt to get us to chase him. SO FUN!!!

Hey girl...next time you are in Columbia, even if it is during the week day...you should stop by my school!!!! miss ya!

Yay walking Eliot! And that stroller? How very non-Guatemalan of you! Oh, and can I just say that Eliot has put all of his energy into getting TALL!!!

Those pictures are great! Eliot is so beautiful! We have to get Yuri and him together. Maybe he could teach Yuri how to walk:) Really though, we should hang out sometime. I know Michael would really like to see you guys too.

You have been so busy!! Shame on you with a "scooper stroller" at the zoo!!! You are by no means a "scooper"-get a new stroller!LOL
SO funny about Eliot and the walking ventures and all the sillness at night-sounds a little like my house.
Jodi

I am not sure how to handle the fact that Eliot is getting so flippin' big, emotionally...just thought you should know...also want you to know that Madi is wearing El's cute little navy blue pants tonight as jammies...pants that would probably not fit on his big toe now! We pretty much like you alot and are quite crazy over here missing you!