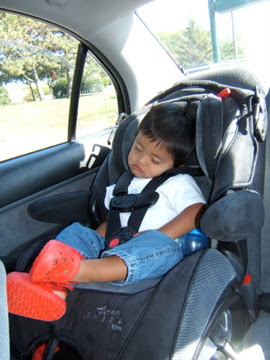 After Guat-Fest, this was the activity until we got to Forest Park for the annual Balloon Launch. We've enjoyed this St. Louis tradition before but there's an added excitement when I can share it with Eliot. While I've enjoyed aspects of life before, it's as if certain things went from Black and White to full color.

When we got home from Guatemala, our house was filled with balloons and this became one of his favorite words. It's rather cute how he pronounces it, emphasizing the 'L' sound by sticking out his tongue. So, we thought the balloon launch would just elate him. I really thought I'd hear "balloon" all afternoon. However, it was rather anti-climactic for us. We sat on Art Hill and watched the Energizer Bunny float over Forest Park but watching the sippy cup roll down the hill was a tad more interesting. I kept prompting him to say his "balloon", even sticking my tongue way out. Nothing. I got nothing. 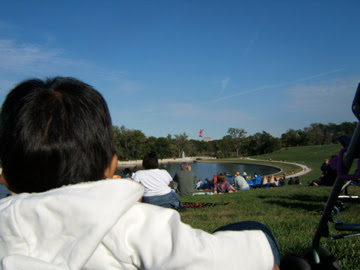 Crawling down hill seemed dangerous and crawling back uphill to attack me seemed like the ultimate fun. Who cares about the balloons... 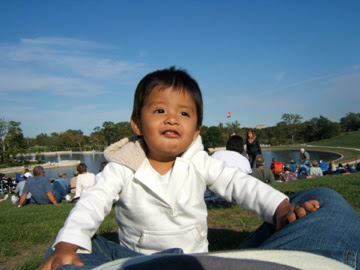 So, when Lisa and Jake called to invite us to ride in a paddleboat at the boathouse to watch the rest of the balloons, we scurried through Forest Park to get there. It was a silly and fun adventure taking two toddlers on a paddleboat. Picture two women bossing Jake, our paddler, around. One toddler grabbing wallets, phones, etc and teasingly holding them over the pond, the other toddler leaning down constantly to play in the oh-so-clean pond scum. 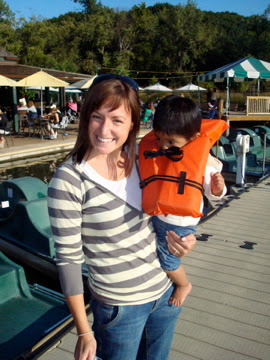 Eliot was not such a fan of the overwhelming life-vest. 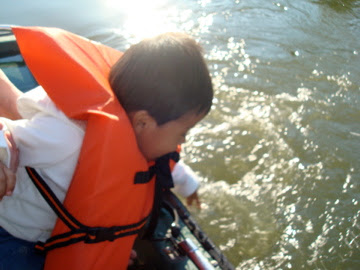 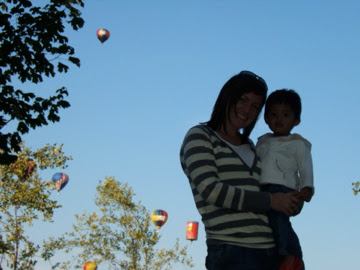 Eliot seemed glad to have his neck back when we were done and we thanked Jake for working so hard to entertain us! The things we put our husbands through! =) After most of the balloons were gone, we stopped at the park on our way to the car. The kids did a little unwinding on the swings. 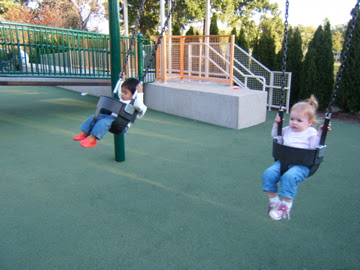 On the way home from a quick dinner with Jake and Lisa, we drove past a car dealership. Out of nowhere I hear, "Balloon" from the back seat. Turkey. There were balloons attached to a few of the cars. He pointed and oohed and aahed at the beautiful display. Turkey.
Posted by Katie at 7:02 AM

and such an adorable turkey too!!!

You guys are adorable and are having so much fun. I love it! By the way, I better not show these pictures to Cesar... he's got the same car seat! Not only do I hear "Ot" three times a day when I put his bib on, but I would hear it also each time we go in the car! :)... So cool!

Isn't it funny how a toddler will say a word over and over on their own, but as soon as mommy wants it - no way! It sounds like Eliot has a really fun personality - just like his mommy!!

I was going to say the same thing Em did...which makes me miss her...and you....and the little turkey!
Love you guys!