Dusk had fallen. Two men, each in their different uniforms, ascend quietly up to the first level approaching the enemy.

"FEE FI six seven" the Giant calls. The two men nod at one another as they nonverbally consent to pursue the beast, resisting the urge for self preservation. They're reminded of their risk as they look into the valley and see their fallen brothers. Those race cars ill prepared for the Troll{Giant} who ruined everything as he came shouting, "I'M GOING TO EAT YOU INSTEAD!!" mistaking them for the Three Billy Goats Gruff.

As the brave warriors approach, their blood turns cold as they hear "HA HA HA" from Goliath himself {Troll/Giant}. After a few meaningful, well practiced samurai moves, Goliath/Troll/Giant crashes and falls dead.

Batman looks at DuctTapeRussMohr as he asks "Daddy, you okay?"

Eliot's imagination is the main source of entertainment around here lately. This scene occurred last night at the shelf behind me as I was cooking dinner. Eliot purchased a couple action figures and a hand full of cars (cuz we REALLY needed more cars, we were running low...) at a garage sale for $.75 Saturday. Somewhere between the sale and home, Leonardo (Teenage Mutant Ninja Turtle) became a "bad guy". Once home, Batman paired up with DuctTapeRussMohr, apparently the last crime-fighting team the world will ever need.

What's that you ask? What's DuctTapeRussMohr? When Russ was a youth leader one of our students was going through what you might call a 'duct tape phase.' So, he made an action figure, complete with theme song, of Russ. This action figure even came with a duct tape backpack containing a duct tape microphone, bible and guitar. Now Eliot plays with it just like you would any other action figure, which is pretty cute. 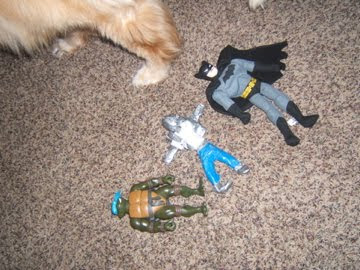 On a similar note, many of you asked what really happened to E's nose. He was sitting at a cement picnic table and lost his footing. However, if you asked him, he would tell you that he was riding a motorcycle wearing roller skates that flipped in the sky.

that is so cute and so entertaining. you need some video of that before he grows out of it.