The other night we watched Meet the Robinsons. When it originally came out, the buzz was how anti-adoption this flick was. If you haven't seen it, the cliffsnotes version would be a story of 2 "orphans" and throughout the movie you see couples come in and interview the kids. During the interviews, the kids blow it and in one scene the chairs are actually spinning with how fast the couple gets out of there. So, yeah, those parts of the movie don't color the process beautiful, making prospective parents out to be a tad heartless and disinterested.

HOWEVER! For the last ten minutes of the movie, Eliot hugged me. While he's only 3 and doesn't fully grasp all the messages snuck into this film, something caused him to respond with affection. I'm not trying to read into this, but not only did he suddenly feel super affectionate, but when the main character gets to {spoiler alert!} go back in time to watch his birthmom dropping him off at the orphanage, Eliot ran over to the end table and pulled out the picture album of "Tiny Baby Eliot" (what he calls it) of his baby pictures when we met him at 6 weeks old. He wanted to look through it WHILE WATCHING THIS PART OF THE MOVIE. Random? I think not.

In conclusion:
*Does Eliot "get" adoption already? I think he does more than we give him credit for.

*Is "Meet the Robinsons" anti-adoption? I'm going to rally on the side of no. {spoiler alert} and {speculation alert}If the main character had ended up with any one of the many couples who came to interview him, he wouldn't have become a wildly successful scientist/inventor. 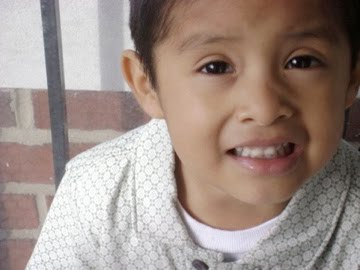 P.S. This is the face that leaned over into my ear at church and whispered "I'm your chocolate chip." 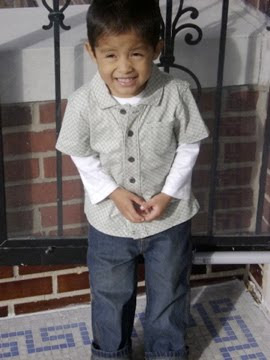 Wow Katie, quite the heart tugging story there. Eliot is blessed as well as you guys are blessed. God is good.