We live in a great apartment. It's not too small for 4 peeps. Until you add all the stuff . All the stuff we decided we needed along the way. Half of it we don't even remember we own, honestly. It's overwhelming at times and I'm sure overstimulating to the boys. Not to mention, the kids play with the top layer of all of the toy baskets mostly. The bottom ones seem to be perpetually benched.

I'm not sure where I first heard this idea but we're trying it out. We're calling it The Switch Out. The last few days we've started filling boxes with half of the toys/books/puzzles/games. (Because the majority of our space is filled with kid clutter.) The plan is to put those boxes in the basement for a few months, then switch out the first set with the second set. Essentially rotating two sets of toys/books into circulation.

So far the kids haven't asked for anything that's already packed up. It feels more simple, less chaotic. Makes me a little giddy. I'm also looking forward to the boys seeing their packed toys in a few months! It'll feel like Christmas!

After we'd already started this, a friend sent me this article on Apartment Therapy. Good stuff if you're needing some guidance on how to get through it all.

Now, to help Dez and his spoon hoarding issue... 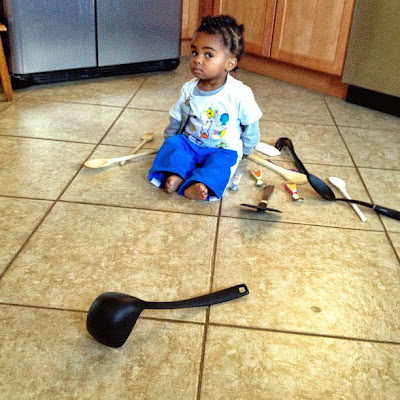