There's a verse in Song of Songs that reads, "My beloved to me and I to him". If you're unfamiliar with that book of the Bible, it's an incredible love story. The best instructions on how to love can be found in the subtle (and not-so-subtle with those fawns and hills and such) verses of this old testament book. 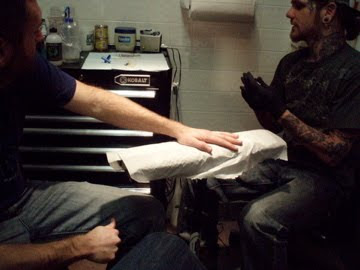 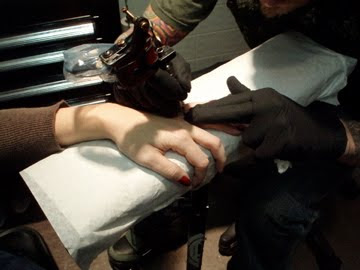 (Pay no attention to the death-grip I have on the table...I was as cool as a cucumber. A cucumber about to pass out.)

Several years ago, the mister and I started talking about getting wedding ring tattoos for our 10th wedding anniversary. Obviously we didn't get around to it then. (read: CHICKEN!) We've talked about it and talked about it. We would start with not knowing what to get and the conversation would ALWAYS end with ideas of the most ridiculous tattoos ever thought of by humans. Seriously, Russ and I can come up with some funny stuff, because that, my friends, is easier than trying to decide on something real and ever-so-permanent. 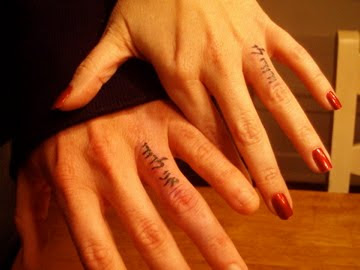 Russ' reads "My beloved to me" and mine finishes the verse with "and I to him" in Hebrew. 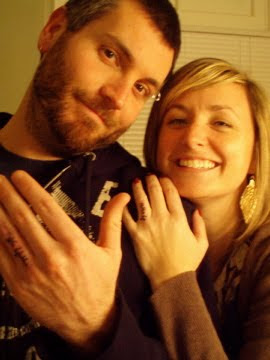 So, the real question now is am I the type of person to be able to use the phrase "tat" or "inked"?

And of course there's more stories of the people and places of the whole affair but those will need to come later. They're good though. And also please note the "I'm not really a waitress" shade. Makes the whole thing more beautiful.
Posted by Katie at 9:50 PM

this makes me SOOOOO happy in my heart. You guys seriously are the hottest couple in the world.

So cool. I am impressed at your bravery! Shane and I talked about getting tats in Mexico and then decided that probably was not smart. Nor did we come up with the best idea for what they would be. Except matching Speedy Gonzaleses with "viva Mexico" written underneath. Inside my ring it says "We love" and inside Shane's it says "because he first loved us." Maybe we'll get those on our 50th when we are old and wrinkly.

I LOVE IT! Very cool. I tried to talk Matt into getting tattoos for our 10th anniversary but there's no way - he doesn't want one, and I'm still in the "I'm not exactly sure what I'd get" boat.

So, how bad was the pain really?

LOVE IT!!! I owe you a much longer email, but for the purposes of this comment, I am just going to praise this decision of yours. I have two tattoos myself...very addicting.

Also. I went with Becky Canatsey to get a tattoo about a year ago. As she felt close to throwing up, I kindly picked up a trash can and held it for her. To which the tatoo artist immediately told me to wash my hands for fear of hepatitis. That is my best tattoo parlor story.

I am fine. Not to worry. No diseases attacking my liver.

What a great idea! Those look awesome!!!!

You are officially inked and yes you can officially become "one of those people" ;) be careful its addicting...already planning my fourth. Love what you guys did, the location, font verse...the whole thing!

Jealous!! I don't think Dane would go for an idea like this...he just wants colorful sleeves

Love it! I had one done 23 years ago and I am still trying to be brave enough to go back for another!

SOOOO ROMANTIC!!! What an amazing thing/idea/verse!! I love you guys!

Maria
PS We should talk...!

Very cool idea. I have 2 and would love another. "i'm really not a waitress" is my favorite Opi too!!

I love them!! You couldn't have chosen a better verse!! I had friends in Guatemala that did that and I always thought it was great... although they did it because of Steve Osborn's "mishap". Not sure you can use "tat" or "inked" though. I don't know, I have 2 and I don't, but I'm not nearly as cool as you, so give it a shot and read people's reactions and make your decision from that. Trust your judgement. ;)