KATIE: There's a thought that says that when you encounter people and spend much time w/ them that they act as an elevator in your life. They either lift you up and encourage you in life or they drag you down. Well, I have a friend here in Guate who must live on the 110th floor because she inspires me. She stinkin' blows my mind. Her name is Melissa and you need to read her blog (which is linked to mine, by the way.) If, in fact, you have time after reading this ridiculoulsy long blog of ours...yikes.

While I've lived here almost 6 months, I have been living in a common routine. Today I broke that routine and spent time doing something new that has been just blocks away from where I live. Melissa and her brother, Peter, were going to a children's home called Hermano Pedro and Russ and I asked to go along. This comes from a strand of thinking that has been building for me and from some conversations w/ Russ. First of all, I have felt as though the Lord has been providing an opportunity to serve outside of learning the ropes of motherhood. I have such a flexible schedule and very little timely commitments in this lifestyle, I just want to honor the Lord w/ that time instead of just watching CSI reruns. Also, how will Russ and I raise Eliot while living (assuming we get to go home at some point...) in the United States? It would be really easy to keep him relatively sheltered and not even think twice about it. People do it all the time. However, we want Eliot to know the value of every person, no matter their difference. How do parents do that in the U.S.?

RUSS: While out running errands this morning Katie began sharing with me her thoughts on this topic. It seems that the Lord has been challenging her in this area quite a bit, and I know that her friendship with Melissa has certainly played a role, as Melissa really lives to serve Jesus everywhere, with everyone, all of the time. Katie spoke of how she knew that the last 6 months have been very valuable for her and Eliot, but she wondered if there was more to it. She is living in a 3rd world country where church groups and missionaries make huge projects out of coming here to meet the needs of people who have become her neighbors. Today we began to explore the idea that perhaps this could be about more than just us, that the Lord could use the large amounts of time spent here to impact others for His kingdom... and in the process, begin to live out by example for our son what it means to love others and share the love of Jesus with those who are hurting and in need. While I urged her not to feel guilty or selfish for having enjoyed so much free time here just hanging out with El, the events of the day would soon prove that there are exciting things that could happen here if we just made ourselves availble and simply asked God how we can make the most of our time spent here. Even if it just meant taking an hour out of an afternoon. 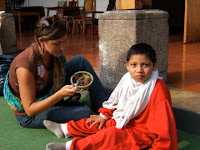 KATIE: So, today we strapped Eliot into the sling and walked a few blocks into the Children's Home. As expected, the first thing I noticed was the smell of urine. Once we got all the way back into the hospital/home there was a large courtyard surrounded by rooms filled w/ rows of cribs. Unlike an orphanage, these cribs weren't filled w/ babies who just needed homes, these metal cribs were inhabited by special needs children/adolescents that can't even do simple basic skills such as eating solids or walking or even sitting up. The overwhelming thought upon going into one of these rooms was, "These are Your children, Lord." As to be expected, there was only a few staff people per each room filled w/ cribs. Melissa went straight for one of her favorites who I assumed was around 3 or 4 years old until Melissa introduced him as her favorite 9-year-old. His face just lit up upon a simple greeting from us. These children don't get a whole lot of attention or even just simple touches throughout the day. Who knows how they got there or where they would be if they hadn't made it there. You can tell the staff does as much as they can, but there are just too many needs for so few hands. Once Eliot woke up from a quick nap in the sling, I took him out to let him play a little bit. I loved seeing him interact w/ the children. It may be one of my favorite moments w/ my son so far. 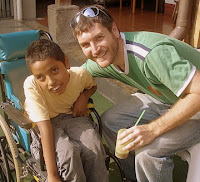 RUSS: I have to admit I was nervous about going. I wasn't sure if I could handle it, and even if I could, I was just uncomfortable. I know nothing about special needs kids and although I can speak enough Spanish to survive down here (for the most part), I wasn't going to be speaking with people who could help me figure out how to communicate with them despite any language barriers. But, as I told Katie, I figured these kids needed this more than I needed to be comfortable.

Once there, I realized, I didn't need to say much at all. Just smiling, holding a kid's hand, calling him "guapo" and stroking his hair was all I needed to know how to do. And boy did I pray over those kids as I stood over their beds. I learned today that ministry can be a very simple thing. We make it into this big project, you know. Be ready to share your testimony, wear a bracelet with colorful beads and know the sinner's prayer. Here's the best part: Eliot knows nothing of all that and he did as much ministry as we did today. Does he have any special gifts? Well, not yet. He can't even talk. But what's the one thing he knows how to do? What does he love more than anything these days? That's right, playing catch. And as I spent an afternoon feeding a kid a Pepsi through a straw, Eliot sat on the floor and played catch. I might add that he held as many hands and gave as many hugs as we did today. Eliot bounced a ball back and forth with Irvin (a kid who is probably in his mid teens, who can't speak or walk). We realized that Irvin did something today that he very rarely gets to do: play ball with another kid. Because even though Irvin lives in a hospital full of kids, it's apparent they hardly interact. Few of them are even capable. And when the game was done Irvin crawled towards Eliot, and w/ a huge smile, reached out and gave Eliot a big hug. My one-year-old adopted son served in an orphanage today. How freakin' cool is that? 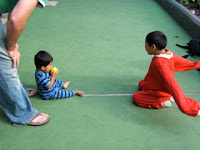 I couldn't be happier that God challenged us to think outside ourselves today. As I prayed over those kids, it occured to me how often we pray that God would show those who are in need that He loves them, that they are not alone, that they are loved. Today, though, as I prayed that over these kids, I realized that the Lord was telling me to do the same thing. That it means nothing for us to pray that someone would know the love of God if we're not willing to be the ones who hand it out to them. 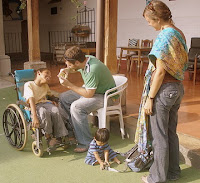 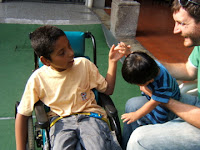 crying again. you guys are amazing. isn't it fun to see your little one interact with others? I agree that is one of the most amazing things to watch. I think Caleb likes to "minister" to old peeps. It's amazing to watch an elderly persons face light up when a baby smiles and reaches out to them.

Katie and Russ, I love your blog and go here everyday! Thanks for this awesome blog! Also LOVE LOVE LOVE the slide show!!!

You are both amazing...you were created SO WELL by Jesus...I so often marvel at who you are....and the wonderful fact that I get to be your friend....Love you so very dearly, Julie

I don't know how I ever did fulltime ministry before you two started this blog. You remind me every single day why I do this. Thank you.

By the way, I wrote about you this week in our newsletter. It's on my blog if you want to read it.

What a great entry to read... it's definitely convicting.

Russ & Katie,
I am in tears, reading this. You 2 are just amazing. Thank you for sharing your experiences. I'll be in Guat. tomorrow...looking at it a little differently because of this blog.