A regular day in Guate? 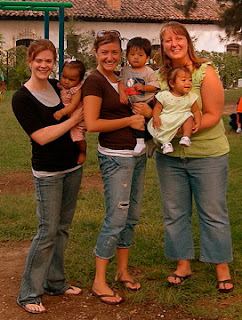 It started that way, at least. Changed a few diapers, made breakfast, put Eliot down for a nap, took a shower, worked on my scrapbook, listened to some music, played w/ Eliot, made lunch, picked up toys, and went w/ a friend to run an errand. So far, so normal.

After our errand was accomplished, we decided to grab some coffee and sit in the park. Two other moms and their babies joined us. Then a group of people, French people pretty much straight off the plane from France, swooped upon our group in the park. First of all, they kept asking us questions in French and when we would look at them with uncertainty the blond woman would start to speak English. We got the usual battery of questions, each in French first and then English: Are we adopting, when do we take our kiddos home, how long have we lived here, where do we live in the states, etc. Then the blond leaned in very close to me (personal space an option in France, maybe?) and asked in broken English if Eliot was Mayan. I replied yes to which she got very excited and asked to see his Mongolian spots (dark birthmark-type spots that look like bruises that a lot of Latinos have). For most of you, this wouldn't be a question that would've popped out of your mouth upon hearing that he's Mayan. For me, this was a first from a non-adopter. If you know about Mongolian spots you know that the majority of them are located directly above the child's butt, so to ask to see it is somewhat...odd. Awkward pause. So there I sat, processing, while my four new French friends awaited my response. They looked so excited that I gave in and exposed my son's little bottom to the whole park. They were delighted to see a real Mongolian spot, lots of ooohs and ahhhs and I think I even saw one of them clap w/ glee. Poor Eliot, at least no one took any pictures.

After the park we headed to the street market to buy produce. Back to normal. However, when I was looking through items on one of the tables, someone stole my wallet. Errrrrr. I thought I was being so careful but they must have been watching enough to see where I'd been keeping it because I was touching the stroller the whole time and they didn't take the whole backpack, just the wallet. Lesson learned I guess? Can I at least pray that they get sick off of whatever they buy w/ my stolen money? Is that a prayer that the Lord would honor? He probably has a better idea, I'll leave it to Him.

Another story I've been meaning to share happened to a couple of the other moms that I spend a lot of time with. Some background: most 'locals' are happy to have us fostering moms around and are supportive of what we're doing. I've had several people that have asked if I was adopting and have said a heartfelt thank you upon hearing that I was. The other side to this is usually low key. There is a general dissatisfaction w/ some ways that we raise our children compared to the Guatemalan way. The obvious one is the lack of layer upon layer of clothing that they keep their infants in. We often get comments from locals that are babies are "frio!!!" However, this story was unique. A couple of the moms were in the park at dusk. The temperature drops at dusk, of course. One mom had her baby being watched by the other as she went to take a quick picture of something. A Guatemalan man wearing a nice suit walked up to the mom watching both babies and said, "That baby needs a sweater." My friend replied that this baby wasn't actually hers but that her daughter did have a sweater on. To which he replied, "You mean, your MERCHANDISE has a sweater on" in perfect English. My friend handled it much better than I would have, she simply replied that she was sorry he felt that way. 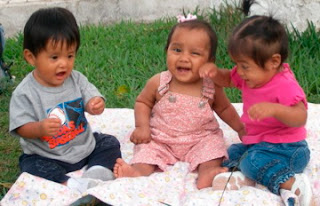 (Photos are of good friends that we spend a lot of our time with!! These pics came from a day we went to a local park. Pray for these women and their babies, as they are also here because 'someone' won't let them go home.)
Posted by Katie at 6:59 PM

That stinks about your wallet...my goodness!! However, your son is absolutely adorable. I know I say that in every post but he is just too cute! Despite all the hardships you continue to face, you look awesome. You still have a spirit of joy on your face that shines through each picture. Hang in there!!!
Heather, Lance and Caleb

I am so sorry to hear that your wallet got stolen.
I love you and Eliot so much!!!
And I agree with the comment above...you do look great!!!

Nice blog! I think it's super cool what you're doing. Don't listen to the naysayers - anyone that would refer to a child as "merchandise" clearly is not motivated by love for the child, but rather by bitterness toward those from the first world nations. I'm glad your friend was able to respond in love. Be blessed!