First of all, Eliot is grinding his teeth and it's driving me crazy!! Someone help! My aunts will laugh when they read this because I used to do it when I was a kid and one of them even used to hit me over the head w/ a pillow at night while I was sleeping to make me stop! I guess this is one of those things that comes full circle!

Secondly, I did it. I took the plunge. I, Katie Mohr, made baby food. Yes, Eliot's been eating it for a while but I've been so unsatisfied w/ the selection and the standards of baby food here that I finally just did it. So far, it's a big hit. I may just be in the running for Mother of the Year yet! (Don't tell anyone, but it's really not that hard and I'm kind of embarrassed that I didn't do it sooner...)

Speaking of Mother's Day (was I?)...Guatemala has their Mother's Day on Thursday. It's not on Sunday like everyone else’s. Just another feather in the cap of quirky Guatemalteca! Going along the same lines...they chose not to do Daylight Savings time this year. They did it last year but decided not to this year. Hmmm. Just like that. 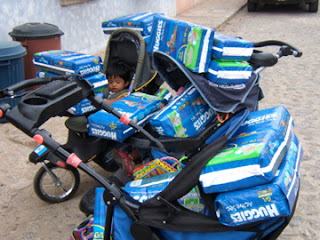 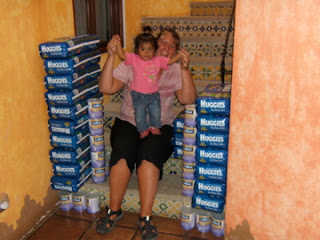 Our suitemates, Sharon and Bella, have had an amazing week. Their story is one that takes some time, feel free to read their blog that I have a link to on my blogspot page.Their week started w/ finding out that an anonymous donor paid their rent for the next 4 months! Then an anonymous donor left "a package" at the front gate for her (see pictures...). The kids helped us bring it to the house as you can see! They now have over 800 diapers and 20 cans of formula! Then Bella celebrated her first birthday. She enjoyed a specially made cake all to herself (and all over herself, I might add)! All that and its only Tuesday! They definitely had this coming after all they've been through! Needless to say, there's been lots of praising God's name going on! 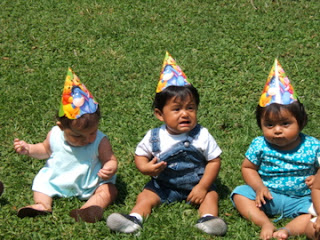 For some reason, Eliot has something against group pictures at birthday parties. Not sure if it's all the pressure to be cute or what. Here's pictures from the last two birthday parties that we've gone to...yikes. I mean...really. 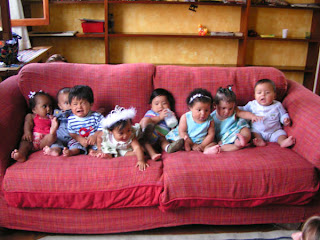 Eliot has moved on from a nasty cold to teething yet again. Pretty soon, he'll have a mouth full! He's officially crawling now (yes, it's about time!) and can pull himself up w/ very little effort now. He's also "cruising" quite a bit, trying to keep up w/ Bella. Out of nowhere tonight he hugged me really tightly and gave me a very sweet kiss while we were walking to our room after dinner. It's really the first time he's hugged me just to hug. Makes all the mess we've been through feel pretty stinkin' worth it.
Posted by Katie at 7:14 PM

I love the pictures!!! El just likes to have all the attention on him it sounds like. God is so good and it amazes me that He uses little things like smiles, or hugs and kisses to show how much He loves us.

I love the pics! So cute! We miss you and WILL see you soon. God knows whats in store....

Wow, I can totally hear his sad little voice crying when I see that silly face. So freakin' cute. Saddest face I've ever seen.

Daisy and Sammie were definitely just looking at me like an idiot when I was laughing so hard at those pics!

Hey Katie...I am David Robertson's wife Amie. I found your blog's link on the Morrison's blog. I have tried to keep up with your journey through mutual friends...but have never gotten any details. So I guess the first thing I should say is congratulations on your beautiful son! We need to get together when you guys get home. We adopted our son Ben domestically and he is about 4 months older than Eliot. Our adoption is also transracial (Ben is black). We are currently fostering a 3 month old as well (also a black male). We are waiting for the adoption process to get started with him in the next couple weeks.

I know how hard it is to be in limbo with this foster/adopt stuff in the US, so I can't even begin to imagine what you are experiencing being separated from your loved ones. Each day you walk in obedience to God's call... you bring Him glory. Just being there crying on the floor broken, when you feel like you are at your weakest point...He is using you to point others to Him.

I don't even know you or Bella and her mom, but I read both of your family's stories at least once a week! I'm actually a friend of Heather Dillard's, and found your link off Caleb's site- It's like watching a movie or reading a book (except I know you're LIVING it!) and you want to skip to the epilogue and figure out where they wind up!