Sorry if the sideways smile annoys you, I don't have any emoticons on this program!

Eliot is getting sillier and sillier, of course. Here's a few stories that have made us laugh lately:

*Russ was practicing guitar in the back room one afternoon and so Eliot quickly crawled back there to help. (He's become quite the accompanist in the last couple months) The guitar was placed out of Eliot's reach but he wanted to stay at dad's feet so he sat down. You could see on his face a look of "well then, what should I do? I can't just sit still" and he spun around to find a bookcase he hadn't yet discovered. The book case is pretty full of tons of our books (eliot's are in all the other cases, this one is for our stuff). Out of all the books that he could have chosen I walk in the room to see him flipping through a workbook titled, "Spanish Made Simple". 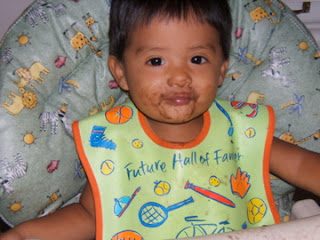 (Eliot showing off his frijoles go-tee)


*We had friends over for dinner tonight and it was getting close to time to leave for another meeting we had scheduled. We put Eliot on the floor to play for a few minutes while we gathered our things to get ready to go. Russ heard Jon say to Eliot, "Hey, that's neat that you know how to do that!" Hearing this Russ came into the room to see what amazing skill Eliot was showing off to our guest. He stepped into the kitchen to see Eliot with the snot-getter-outter tool(Nasal Aspirator is apparently the technical name for this object) stuck up his nose. We put in in the kitchen earlier to wash it out and Eliot had found it, stuck it up his nose and was successfully extracting hidden boogers. We are proud parents... 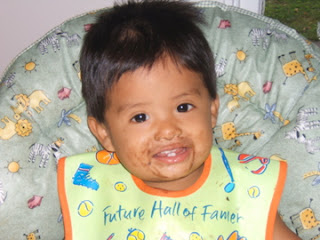 *Eliot also goes through phases of acting as though he were a chipmunk. He can hide an impressive amount of food in those cheeks! So during dinner he put a bunch of food in his mouth and after a while (plenty long enough to chew and swallow) he gave us the sign "all done". So, Russ picked him up and took him to bath time. They played and splashed and had a great time. Russ dried him off and came out with our little baby burrito and a funny look on his face. When we asked what was going on he said that Eliot still had chicken in his cheeks from dinner all during bath time. Sure enough, as Eliot started talking to us we could see chunks of chicken hidden there in the back. Even after Russ lotioned him and dressed him in his pj's, there was still some chicken left!! Apparently Russ's chicken was so good that Eliot felt he needed to really savor it as long as he could.
Posted by Katie at 9:08 PM

Could he even get any cuter? He looks like such a big boy now, can you put him on pause?

oh my goodness! he is looking sooo grownup!

KATIE! I want to send you some of the photos, which I have to say, are amazing (!!!) but I can't find a link to your email anywhere. SO, since I can't email you these tonight, do you have time to stop by tomorrow to see them and pick up the disk??? I have to be home b/c I have a utility apt from noon-4pm, but if you wouldn't mind coming here we could look at them together. Give me a call in the morning if you can... 808-3425 cell. I had a great time today, thank you so much for trusting me with your family portraits! Remind me about my idea for a collaboration! :)

Seriously, he should be the cover boy for kids adopted from Guatemala...I want to EAT him...he is so cute and that look in his eye....hmmmmm, I think I see a little of his mama in that look!!!