Eliot is in this interesting stage of life where he knows a little bit more of what he wants and doesn't want. He wants fruit all day every day. He doesn't want to take an afternoon nap (which is slowly being phased out anyway). He wants to be with me when we're in a crowded room and he wants to play basketball. He doesn't want to take long car rides and he doesn't want me to work on the computer while he's playing. Eliot may not know that it's inappropriate to "call the hogs" during church, at least not in MO, and wouldn't understand that for a little while so it's up to us to make that clear. (Silly example, I know, but applicable for us!) So, this part of motherhood presents the question that I daily, sometimes hourly, struggle with: Do I do what's easiest or do I do what's best? Do I do something because it works or do something until it works?


As Russ and I say goodbye to a group of kids heading to college this week, I'm contemplative over each one. Someday, probably sooner than I realize according to all the moms I've talked to this week, Eliot will be leaving home. Blah. We just got here! =) There's so many aspects of each of these "kids" that I pray for in Eliot. For many of them I don't have to wonder which of their moms chose what was best in place of what was easiest, especially when it came to boundaries, i.e. health, friends, television, entertainment, education, etc. I also know that this is a part of parenthood that doesn't come and go but is a constant in shaping who your child is and will be. I wonder why we label this as being "the bad guy" sometimes when in the long run; it's clearly the best.

So, couple of conclusions for me this morning:
1. I will choose what's best when I can but not beat myself up when I'm inclined to choose what's easiest once in awhile. I will not succumb to his fake cry and give him what he wants even though it's against my better judgment.

2. From here on out I'll consider myself "the good guy" whenever I'm making Eliot do something that he may not want to do! He will eat those carrots! (p.s. thanks mom and dad for not letting me go to that party in 7th grade even though I threw out every teenage drama queen thing I could think of to make you change your mind or regret it! You were the good guys, after all!)

3.I will pray daily for the influences that will come into Eliot's life that would encourage him to choose the best, not the easiest when it's up to him. I know our influence will only go so far in Eliot's life and that there will be others that come along.

That's about it this morning. I'll throw in a pic of Eliot so that you'll have something to grin at after you read through my declarations of motherhood! 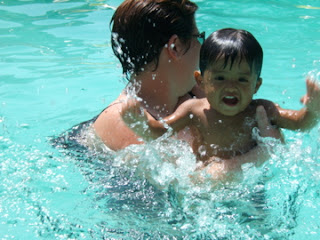 Yes!!!! I love that you addressed this, publicly, head-on. Shooting straight from the hip, as always. One of my favoritest things about you! Being the "bad guy" isn't always easy (in fact, rarely is) but it's WORTH IT. I see evidence of it every day. And, as far as fruits go, is El-Man protesting fruit/veggie mixes also??? Love to you!

So, I probably didn't help at all when I would give in a slip him one more piece mandarin orange or one more slice of strawberry when you weren't looking!!! But, hey that is what aunts do...right?!?!?
I miss you guys tons!!! I am ready for my little smiley nephew to be back here to smile at me everytime I walk into the room!!! Love you guys!!!
Aunt MMMMMMM-anda

This is way deep so early in your motherhood role!! You are too cute. You guys just love that little rascal every moment of every day. God is still guiding you guys through the prayers of both your parents. What does that tell you? It is a cycle that does not stop, thank you, Lord. I still pray for the choices you and Russ have to make, my mom is still praying for me, and yes, her mom for her.

I appreciate your honesty. My advise at the moment is "stay the course". You are definitely on the right track. Watch closely as God leads you. You'll make a few mistakes, but by a long shot you'll see far more successes as you walk this road of parenthood. You - and Eliot - are in good hands.

I love you and miss you - Kisses to Eliot!!!