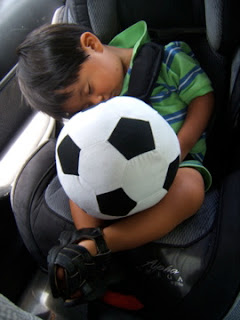 Eliot got his first road trip done with. Or should I say, we as parents got our first road trip with a baby over with. The first hour was great, Eliot playing until he fell asleep. Then we stopped for lunch and I had to use some self-control not to lose it while Eliot starred at two large hairy construction workers during our entire lunch. When starring didn't seem to be enough, he decided to growl at them. There's something about Eliot's little face that makes even the hairiest of construction workers giggle. Yep, these two men, tired from half a day's work in the hot sun, found themselves giggling at our little guy as he repeatedly growled at them in between french fries.

Then we got back in the car to head out on the longest leg of the trip. We got about 45 miles away before we decided to stop at a reststop to give ourselves a break from Eliot's fussiness. He apparently was not a fan of roadtripping. We were definitely not fans of his newfound hatred for the car seat.

For the next hour, he declared his unhappiness but eventually fell asleep, PRAISE GOD! We made it to Arkansas with only an extra half hour of time added to the normal time frame. 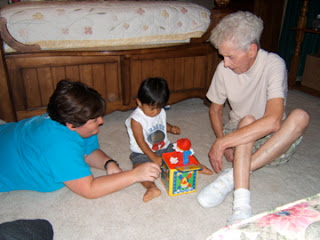 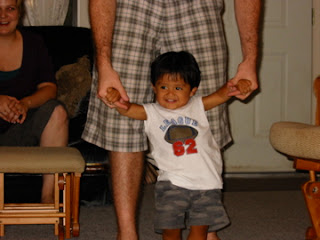 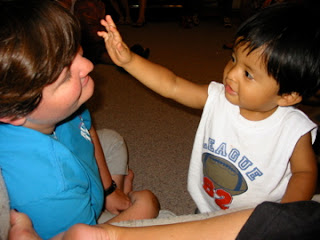 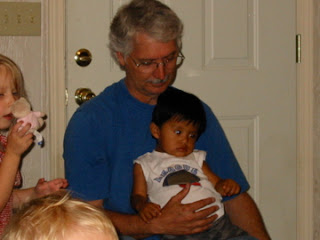 Eliot met a bunch of Russ's family within just an hour of being here. He happily pulled out all the tricks. We'll see how much time we have to blog over the next few days, there's a shimmery pool calling my name just outside the door...
Posted by Katie at 8:49 PM

Nice ball, Eliot! Don't let your parents convince you it's not the greatest sport in the world!

too fun! hey, at least he is facing fwd in that carseat :) I almost killed myself trying to bend backwards to wipe Gabriella's nose today, while driving :)

Dear Ones! You three look amazing...congrats over and over-- we are just rejoicing with you over little Eliot....

Wish we had known you were journeying south-- we are now in TEXAS! But you knew that?

We need to reconnect-- SOON. IN the meantime, what's yo' e-mail chile? I can't find it anywhere on here.....

You know where to find me? www.music.unt.edu

Love to you all!

Dear Ones! You three look amazing...congrats over and over-- we are just rejoicing with you over little Eliot....

Wish we had known you were journeying south-- we are now in TEXAS! But you knew that?

We need to reconnect-- SOON. IN the meantime, what's yo' e-mail chile? I can't find it anywhere on here.....

You know where to find me? www.music.unt.edu

Love to you all!