The moment my heart burst. 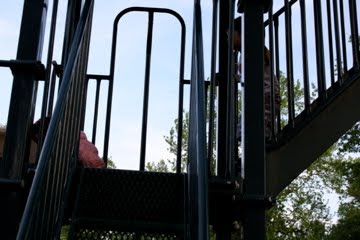 At the park on Sunday I was pushing E-beast on the swing and this cute little girl (who said she was 2 yrs old but she was awfully big for that) asked if I would push her, too. I told her I would be happy to, but to go ask her mom if it was okay, to which she replied, "But she's in the car way over there." Keep in mind this is a fairly large park and all the cars are pretty far away. I asked if she was with someone else and she said her sisters were here, too, but they were in the car.

So, I put her in the swing next to E. They were silly and had "races" and giggled. After awhile she pointed and said her sisters were coming. They were probably around 7 and 9ish and she wanted to get down to play with them. She followed them up to the highest slide but she was too scared to go down the slide and began crying. They made fun of her and kept playing elsewhere, leaving her stranded.

Eliot looked at me with big eyes and said, "Mommy! Let's save her!"

He doesn't get it yet, but he's totally on board with fostering. He's gonna rock it. Probably better than we will.
Posted by Katie at 6:16 AM

that's love. seriously- that boy has some BIG love to share. must be God, huh? : )

What a sweet boy! I can't believe she was essentially there alone!

I gave you an award over at my blog today...swing by to check it out!

you've got a special boy, mama. praying for your journey...

He is such a sweet boy!!! I cannot wait to see him in action once you get a foster.

Katie! This story is so bizarre!!
WE were at a park on Tuesday and there was a little girl wandering the playground seemingly by herself (three-ish I guessed)... we were the only people there. She globbed right onto Sawyer and eventually I was pushing them both on the swings. I asked her where her mommy and daddy were... I didn't even see any other cars around and we weren't near houses. She replied "they're at work". My heart skipped a beat as I asked her who she was here with and scanned the parking lot again, finally spotting a small car under the shade of a tree on the backside of the parking lot... way beyond shouting distance. She said her grandpa was there, in the car, but he was too old to play and he always stays in the car.
Anyway, we played with her for quite awhile but eventually we had to head home to put the baby to bed. We said our goodbyes and Sawyer left saying to her, without any prompting from me, "be safe!"
On the way to the car Sawyer asked me if she could come home to our house to keep playing so she wouldn't have to be lonely at the park. He told me he was worried about her being all alone. We looked back and she was just sitting bored at the bottom of a slide. I assured him she wasn't alone, that her grandpa was watching her, and it was such a nice day to be outside. But as we drove out of the parking lot I drove by the grandpa's car; He was asleep and he was not just old, but OLD. ELDERLY. Like it made me nervous that he would be behind the wheel of a car and there is no way on earth he could properly take care of a three year old. Like I almost wanted to stop and make sure he was just sleeping, ya know?
Sawyer was watching and noticed he was sleeping too and commented, "he can't really watch her too good if he's asleep. I hope God knows we can't watch her anymore and sends someone else to be with her here!"
Exactly my thoughts, buddy. Exactly.

Anyway, I just wanted to share because I was reading your recollection, my mouth dropped open at the similarity or our playground outings this week.
As we're preparing to move we've been really praying and trying to decide whether or not we're supposed to go through all the foster stuff all over again in a new state or just try and persue adoption... and Sawyer's concern and compassion for this little girl nudged my heart, but you and Eliot really drove it home. Yes, we ARE built for this! Our whole family is.
Thank you.

Oh my goodness, so cute! I love it!

you have one amazing little boy living in your home.