Last weekend our church rented out one of the local bowling alleys. What a better opportunity to take E for his first bowling experience than when it's free, not smoky and surrounded by friends?

Here was my favorite part: 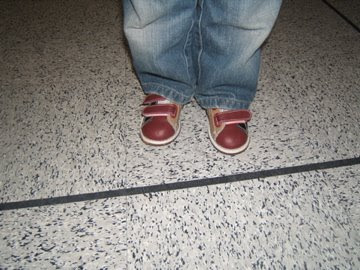 Here's some other highlights: 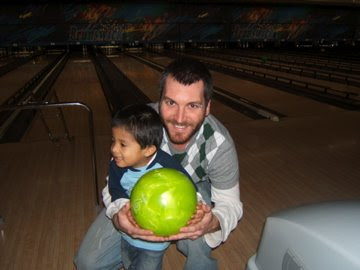 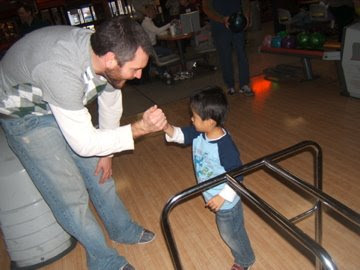 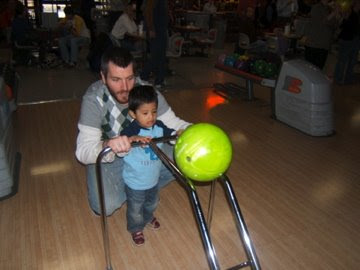 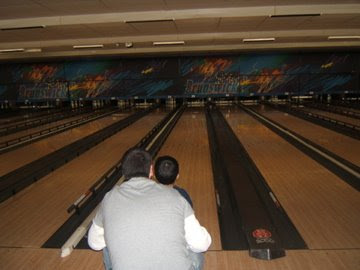 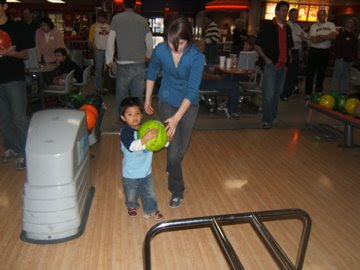 Laura and her fiance, Dane, were in town and came along! 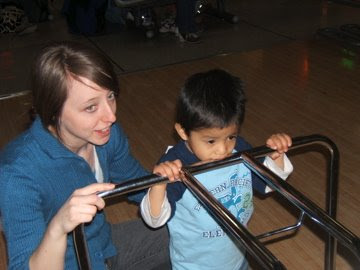 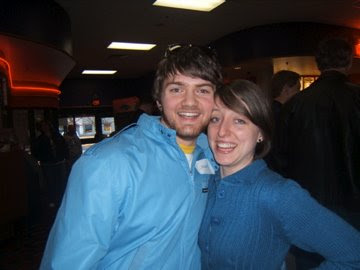 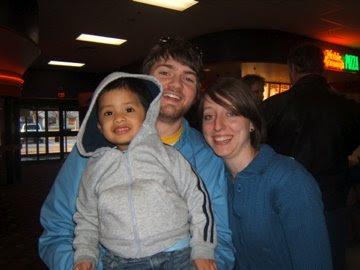 When calling a prospective pre-school that you may really want to get in, try not to be saying, "Eliot, get that goldfish out of your nose!" when the lady answers the phone.
Posted by Katie at 10:31 AM 4 comments:

To blog or not to blog?

First off, one post a week isn't working out for me. I hate it. I have too much going on not to blog. Some topics seem so insurmountable that I ignore them, leaving you to fill in the blanks. So, I fluff. I throw a few pics at you of my little brown man and hope that you'll keep coming back.

Life has been busy, but there's much to blog about.

* Potty training is going really well. Squatty Guate has been out in public several times now and made it just fine. We've had a total of 4 accidents in the last week and a half and those instances have more to do with, uh, some technical difficulties. Yikes.

* Several of you have mentioned that you need pics so you can picture all the adventures of the Mohrs in our new place. Every time I think of it I look around and calculate how much work it would be to clean before I posted pics of the state of our living all over the web. If you remember what our old house looks like, just put us back in there. It's like the guy who starts dating a girl that looks just like his last girlfriend.

*We hosted a 'housewarming party' here at the new place. Hung out with some new friends and some old friends. If you weren't invited, it's because you don't live in the city or I forgot you because my brain no longer works.

*We've had some bigguns goin on here at the ranch. Issues that I'm not super sure I want to share on the blog but it's brewing. To blog or not to blog? I'm not sure. (This isn't some comment-bait, by the way.)

*I've decided to become fierce about my book. It's moving along and I'm getting more excited about it. I even wrote a book proposal. Aren't I fancy?
Posted by Katie at 1:56 PM 2 comments:

Let's start by sharing that R was out of town for this holiday, which isn't a big deal. I got over that whole must-celebrate-holidays-on-the-exact-day-or-our-marriage-is-over thing a long time ago. So, that being said, you may find it odd that I was awoken on Valentines Day to someone singing John Legend's Good Morning love song to me. It was our aspiring Latin Lover. "I'm a little tea pot" is so last season, he prefers grammy award winners in his 'almost 3yrs old' maturity.

The first thing on our agenda for the day was a funeral. We received word that our next door neighbor from our old house had passed away last week. (Jessa, sorry you had to hear it this way) He was an elderly man with health complications who had been declaring his likely end for months. He wasn't really a favorite in the neighborhood but we liked him. Eliot especially liked him and would stand on our front porch and yell to him almost daily. They had a cute friendship. He's also the man that when we moved in 5 years ago hobbled over to our house with a freshly baked apple pie and said, "Don't worry, there aren't any razors in it."

After attending the catholic funeral (performed in Latin, of course) I felt that we needed some kind of pick-me-up. Visions of sugar plums were dancing in my head. Well, maybe not sugar plums but marshmallow lollipops sounded fun and yummy.

I set it all up and we got started on our quest to make the perfect goodies for our new neighbors and a few for ourselves. Unfortunately, after some lollipop casualties, one of us got fired for some health code violations and repeated aggressive activities. 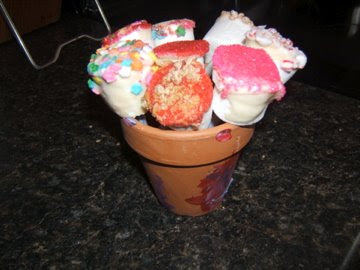 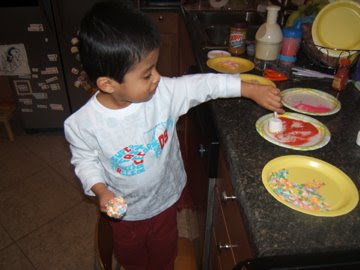 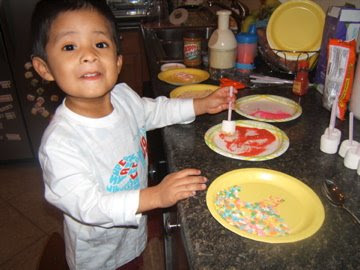 And since R was out of town I emailed a few friends to let them know I was going to be chillin that night with some cookie dough and a great chic flick after E went to bed. Only one of my friends could make it, one that I've only met a couple times before but asked if she could bring a friend. That new friend happened to be really into vampire movies and brought several with her. So, instead of a chic flick, we all munched on some popcorn and watched a classic vampire movie, laughing at our randomness.

A perfect ending to a perfect day.
Posted by Katie at 10:48 AM 4 comments:

I stole this idea off another blog. Using kitchen utensils really mixed things up. 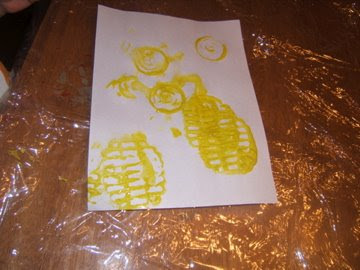 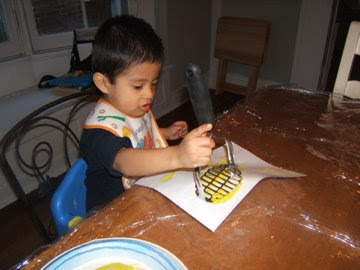 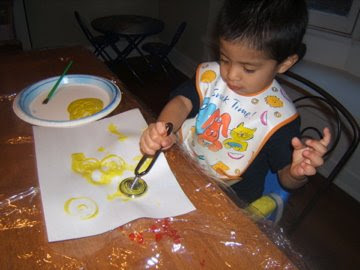 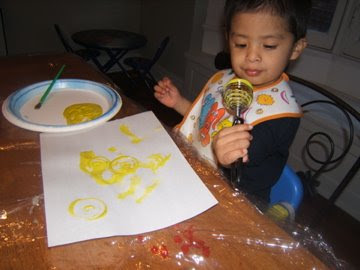 I've got a few non-surfacey blogs brewing. Stay tuned.
Posted by Katie at 6:41 PM No comments:

Heard after dinner tonight from a small brown boy:

"Katie, where your ipod?"


Pretty sure I never asked my mom that. And, no, we don't encourage the first name basis exchange, but every once in awhile it's pretty entertaining.
Posted by Katie at 6:50 PM 5 comments: 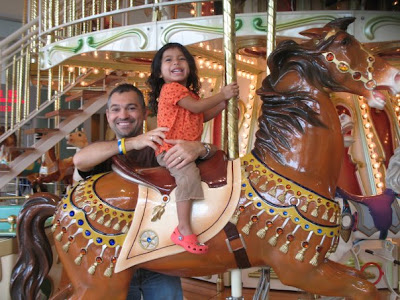 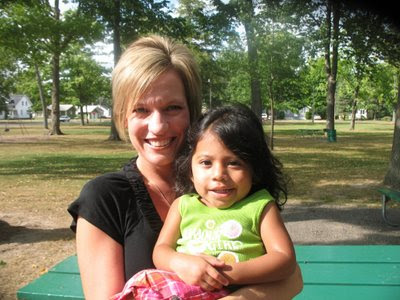 Paul passed away on Saturday afternoon. The cancer took a turn. I can't get my mind around what Shelly must be feeling. Please pray for her and for their family.
Posted by Katie at 9:54 AM 4 comments:

I've apparently been keeping you all in the dark on the development of fluid management. Here's the break-down:

Saturday morning: Too many puddles to count. One small lake to speak of. A mother so spent she considered jumping off the potty train to be a diaper changing vagabond until further notice. And by 'further notice' I mean, when E is twelve.

Saturday afternoon: Diapers are our friends.

Sunday: Church and super bowl party = diapers are our friends.

Monday morning: We'll go with 60/40 in our favor, enough that said mother is talked away from jumping in front of the potty train.

Monday afternoon: Quit while we're ahead= diapers are our friends.

Tuesday: Potty Training? Huh? Who? No one here by that name, you must have the wrong address.

Wednesday 8:00am-7:00pm: NOT A DROP WHERE IT WASN'T SUPPOSED TO BE, INCLUDING NAP TIME!

Thursday morning: Women's and childrens ministry= diapers are our friends.

Friday: Why isn't your kid potty trained? Cuz mine is. 100% again today, including naptime! Who's the whiz kid now, playa!
Posted by Katie at 1:34 PM 6 comments:

Go to your nearest bookstore and buy this:

Same Kind of Different as Me

However, this is not a good "airplane read". This is a hide-in-your-room-read. You will need to put the book down and weep. Trust me. Buy it, and hide it, peeps.

You'll be a better person because of it.

p.s. If you hypothetically were to be a follower of The Bachelor, and I'm not saying I am, then you may find this blog entertaining you every Tuesday morning. At least that's what a friend of mine says, I mean. It's funny enough that you might even read it aloud to your husband who isn't watching the show from behind his laptop every Monday night.
Posted by Katie at 10:11 AM 6 comments: