When a good friend says, "How are you guys doing?" these days, I can honestly answer "Great!". It's weird.

Our world is always full of things to be thankful for but for the last 7 years, there's been a lot of unrest. A lot of risks. A lot of adventures. A lot of hard decisions. A lot of hard conversations. We've had successful adoptions, unsuccessful adoptions, offers that never panned out, a return into infertility, starting jobs, ending jobs, moved back into the city, planted a church, switched to a different church, had close friends move away, started and ended bands and businesses. So...yeah, a lot of unrest.

Within the last year we finalized Dez's adoption, Eliot's IEP was set and he is killing first grade, and Russ was offered his dream job.

We've lived with huge question marks overarching our lives for so long that it feels unfamiliar to have them all answered.

When I taught 4th grade we spent 30 seconds of one social studies unit talking about farming practices in the middle ages (my class was nothing but gripping, I tell you. Edge of your seat kinda stuff.) That was the first time I'd ever heard of fallow fields. We didn't have a lot of those in the 'burbs of Detroit. If you look at the handy graphic I stole from the Internets, you'll see a visual on what I mean. Farmers would leave a designated section of their land unseeded or dormant between planting seasons. That allowed the soil to regenerate its mineral base, keeping the soil healthy and ready for the next planting season. 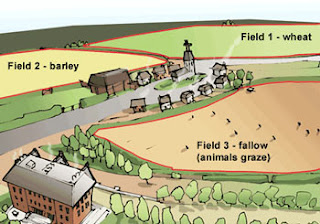 That's where we are. After the last 7 years (number of completion, anyone?) we're set in a fallow season as a family. It feels unfamiliar. The temptation is to stir something up. I hear stories of people fostering. Of people adopting. Of people starting businesses or buying new homes. We feel weird not doing anything risky or uncomfortable. We're not "in the game". We're on the bench.

Being in this season is giving us (me) a chance to catch up on things I've been attempting to fit in to the rest of our crazy life. It's given us a chance to start tying some loose ends that have just dangled for years. Things on the back burner are now actually receiving some attention.

I'm trying to be a good steward of this time so that when it's over, we are healthy and ready for the next planting season. Cuz, I mean, there's still room on our couch...
Posted by Katie at 11:40 AM 1 comment: 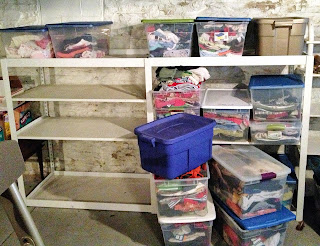 My apologies to anyone who receives a foster girl...you're on your own. For those who get boy placements, give me a call!


Some details now that this thing is taking off:

*Two families have already taken advantage of our stash! Woot!

*We are now offering donation letters for people to keep for tax records! Woot! #givemeyourstuff

*Target or Home Depot gift cards to pay for more tubs! (our basement is gross.)

What we're not taking:

*Toys/books/games/puzzles. Feel free to start that ministry in your own basement.


Also, if you're in the STL, spread the word to families fostering/adoption or involved in Safe Families. This is open to all, not just Journey Church folks. Otherwise I'm just a fancy hoarder.
Posted by Katie at 11:45 AM No comments: