Little House on the Prairie. And by "on the prairie" I mean in the City.

For my records years from now I need to document what's going on. Cuz it's a lot. And details will slip through my memory.

About a year ago we heard about an organization called Ribbon Cutters. I dismissed it, assuming it was some scheme. But then we met with them and saw their work.

When we moved into this apartment, it was out of urgency because our house sold so fast. We were only going to stay a year. That was almost 6 years ago. 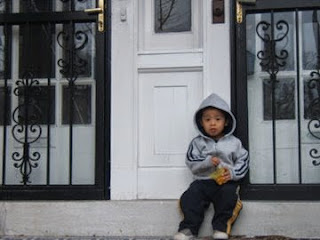 We met with Ribbon Cutters early spring and started looking for houses. They were working with us to find a place that was structurally sound, within our budget, and was in our current neighborhood. (We're obsessed with our neighborhood but it's hard to find houses anymore…) We'd looked for weeks, finding nothing so I finally threw out a FB status asking if anyone knew of anything rehab-ish in our hood that wasn't on the market but should be. A friend commented that there was a vacant house across the street from them so I stalked it like Sherlock would, noting the snow had zero footprints up to the front or back door and it hadn't snowed in five days. Not even mailman footprints. I emailed RC and they researched but couldn't find the owner info. About 20 minutes after getting that text I got a message on FB from an acquaintance saying she and her hubs own a rehab property and were thinking of getting rid of it. I asked her the address and guess what she told me? THE EXACT ADDRESS I just heard we couldn't get info on, the EXACT ADDRESS I stalked in the snow.

Lots of little steps later and our contractor approved THAT EXACT ADDRESS as something that could work! (insert dancing jig by Russ and Katie)

Meanwhile, back at the ranch, our current landlords put our house on the market and weren't completely honest with us about it. We've had a "good faith" lease (which I don't recommend) for the last couple years. On our drive home from spring break we got a call from our new landlords (nice nice people that didn't know we didn't know) saying they needed to move in by May 1. Surprise! That gave us roughly 5 weeks to pack and find a new place to live. Our rehab wasn't set to be finished til end of summer. Two kids, a dog, a house full of stuff and about 120 tubs of clothing with foster families coming to and fro? For a four month lease? Should be easy to find, right? Not to mention convincing our social worker that we're not *really* homeless.

Lots of little steps later we were able to move just downstairs in the same building. We had until Aug 1, which should have been plenty of time. The original time line had them finishing by the end of July but construction didn't actually start until July 15. The hold up had to do with permits and government hoopla. (insert PTSD symptoms, me rocking back and forth saying "This is not PGN in Guatemala" over and over.) Our new landlords gave us a two week extension but the new tenants need the place by mid-august. The Rehab is a total gut so there's no chance of living in it while it's being finished. So, we're putting most of our belongings in a pod and living on the simplest of basics in an apartment for (hopefully) only a couple weeks until the house is done. RC is flying through the renovations (not hastily, just efficiently) and the new estimated date is end of August. 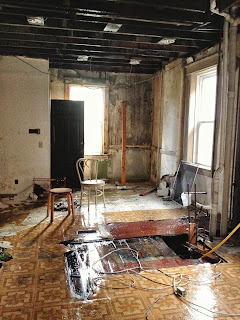 (Living room/kitchen/bathroom area when we bought it. The shine? It's rain water. Coming through the second story from the roof.) 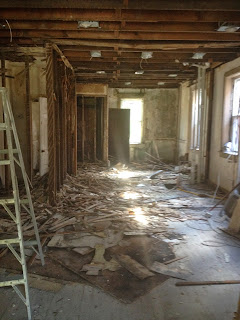 (Same area, after some demo.) 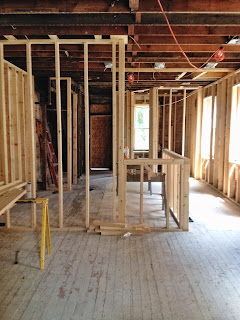 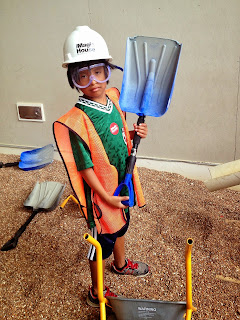 The demo crew had a bit of some attitude… 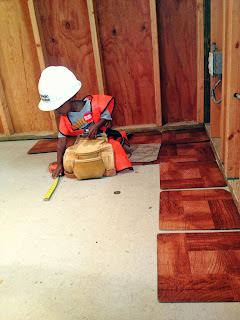 The flooring guy offered to work for marshmallows, so that helps.


Back in early spring we packed our winter stuff knowing we wouldn't be here winter of 2014.

In April and May we packed everything we wouldn't NEED until August, moving only the minimum to this apartment. Even cutting the boys' books and toys amount. Storing the rest.

Now we're packing again, going down to the absolute bare minimum (think: suitcases and mattresses and paper plates) to get us through this next apartment.

I'm handling this like I do when I get a tattoo. The process sucks and is super difficult but is worth it afterwards. I can do anything for a few months, right? I know that about myself after Guatemala, right? Only I feel like there were more margaritas involved in that process. Im'ma need to change that for this one.

*The house isn't huge but it'll meet all our needs. And its in the location we wanted. We're super happy with Ribbon Cutters, they've been a huge blessing in this process.
Posted by Katie at 1:02 PM No comments: