The Triangle. (or Triad)

For those of you peeking into the adoption world through the glasses of our life, you probably get an overall happy, fuzzy feeling about it. Our boys are cute and silly and we have endless adventures. I talk about adoption often but it's always from the side of the adoptive parent. I rarely talk about the hard stuff. But it's there. Always. It's as much a part of the story as anything else.
At the base of every adoption story is a triangle. The adoptive parents, the adoptee and the birth parents.
There is no other time when that triangle is more present to me than this week in May every year. Within days of each other we have Mothers Day, both boys' birthdays and Eliot's Family Day (Gotcha Day). All super fun celebrations if we're sitting on the point of the triangle of the adoptive parents. You were born! I became a mom! We became a family! Adoption is awesome! Let's get donuts!
If we sit on the point of the triangle of the birth parents this week is the anniversary of the hardest decision we ever made, the day it happened, the day everyone celebrates motherhood, and the day the government made it all final. That's a heavy week. Beyond heavy. Adoption is heavy.
If we sit on the point of the triangle of the adoptee this week is confusing. It provides as many questions with no answers as it does answers to unasked questions. It is loss and gain. It is beautiful and broken. It is a tension unlike any other. Adoption is complex.
We're not doing anything differently this year. We're still celebrating all week but as the adoptive parents we're not tied to the idea that this will always be a week of Nothing But Joy for our boys. We're taking each year as it comes, letting them guide us as they process all that it means.
I met a birth mom this week (18 years after the fact) and she teared up when talking about Mother's Day. Just 12 hours before, I was excitedly filling out an adoptive family's recommendation form as they start the process. Joy and pain. It's not one without the other. 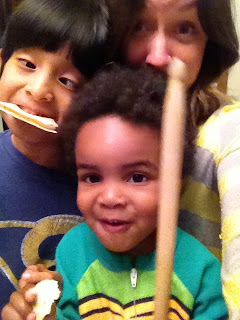