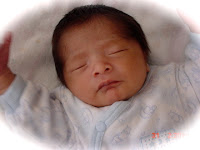 1 Samuel 1:20b: ...and she called his name Samuel, for she said, "I have asked the Lord for him." Exactly one year ago today, not a day before not a day after, Russ and I received an email from our agency with pictures attached of a little 2-week old baby named Samuel. I felt in my heart before we even looked at the pictures that this was it! This was the one! Our coordinator even told the lawyers that chances were high that he was the one for our family. And of course, once we saw the pictures, our hearts were gone, completely captured by a two-week old blob. 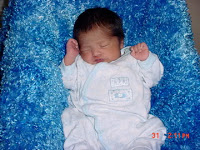 Now, in the adoption world there's a holiday that is celebrated called "Gotcha Day." For each family it is a different date on the calendar but it all means the same thing: This baby is ours to keep. He is our son. It's similar to a birthday but for the entire family as a new branch is grafted into our family tree. It is the day I will cherish close to my heart even when Eliot is 14 years old and driving me insane and even when he is an adult w/ a family of his own.

All that to say, the Lord's timing couldn't have been more perfect. We found out today, exactly a year after accepting Eliot's referral, that we are out of PGN. We actually have been APPROVED!!! The ink pen actually signed in our favor this time making Eliot officially ours. It is absolutely inconceivable for me that this actually happened. Over the last year, this has been the step that has cost us everything while giving us everything. In case you hadn't put two and two together, this means we get to come home. "We".

Don't freak out and head to the airport quite yet. We have bits and pieces to take care of for the good ol' USA before we board a plane. We still have a few weeks of getting a new birth certificate, a passport and then waiting on the US embassy to issue us a Visa for little Eliot Samuel Mohr.


Eliot Samuel is officially ours. 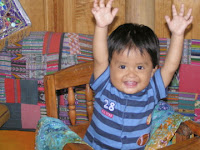 Congratulations! I am so excited for you all! Bella and I will start our PINK DANCE for you!

AWESOME...AMAZING>>>what incredible timing!! I am so glad Russ was down there so you could have this experience as a family!! Can't wait to meet El!!

YEA!!!! We are so EXCITED! Katie, we can't wait to see you again; and Eliot, we can't wait to meet you!
Love, Matt & Katie Schaefer
p.s. I love that you are celebrating "Gotcha Day," my mom and dad did that for me every year and it is a VERY special thing for us "adopt-ees." :)

I am crying, AGAIN...today over this most incredible news, my dear friend!!!!!!!!! No words, just know my heart is overflowing with thankfulness for you!!!!!
Always~Melissa

Katie and Russ, Patrick and I have been praying for you for many months now. We have never posted before, but I was crying with JOY when I read this. Congratulations, and we can't wait to welcome home the WHOLE Mohr family! Katie Murphy

CONGRATULATIONS!!! Once again, I am crying! I am so excited for y'all!

Oh congratulations Katie!! I'm so excited for you! How fantastic that Russ was there...

Can't wait to meet the little guy at a FE concert sometime!

God is good!! How amazing about the timing! It's all about God's time not ours huh? You guys are amazing people and you've touched so many lives by watching you guys go through this whole journey!
LOve you!!!
Luke, Sheri, Ty, and Elli

What can I truly say?!?!? It seems like we have been waiting for this day for a life time. I will gladly celebrate "gotcha day" from now on!!! HE IS FINELY A MOHR!!!!! I feel like I have no more tears to shed...that is until I finally get my hands on that little man!!!

I love all three of you very much!!!

Oh you guys, this is INCREDIBLE! I am so pleased for you, well, maybe pleased is an understatement! What a wonderful blessing. Thank you for sharing it with us. Maybe we will see each other soon?

Praise Jesus! That is wonderful news!

Praise God! We are thrilled for you all! We can't wait to hear the El song by Russ Mohr. We know it will be a HUGE HIT! See you soon!

Oh, Katie!!! I don't even know what to say. My joy for you is just abounding.

See you soon, my friends!

Katie,
I am so happy for you! Congrats on getting out of PGN! It was a pleasure to meet you and Eliot and I wish you guys a great and safe trip home! You're almost there!
Melissa

Russ and Katie...Caleb told me today that he can't wait to meet Eliot, give him a big fat kiss on the forehead(he's good at that), and then steal his toys on your next trip to Little Rock. We are extremely happy for you guys. Over dinner Heather said, 'I feel like crying for them.' I share the same sentiment. Congrats. LD

Congratulations! And how very awesome of God to let this happen with the entire family together!

My mouth just dropped!! I am almost in tears! Once again "taste and see that the Lord is good" It couldn't be more perfect. How great is the Lords plan. How great. This is the best news that I have heard in a while. So does this mean when I come to St. Louis in Aug. I can see the whole family. WoW!! I love you guys.

I am so happy for you. I caught up on your blog today after at least three weeks. I was a little disappointed that you hadn't heard yet, altho' of course I knew someone would have told me. The happy vibe must have tugged on me.

I was so moved by your visit to the home for disabled children. You are so good and deserving of happiness.

We'll plan a great Arbonne celebration for you and Russ and Eliot. We're all so excited to meet him at last.

WOW! BEYOND COOL! Isn't that just like God? Sometimes, it just comes down to that once-and-for-all "letting go", surrendering to where He's placed you and trust w/all you are that God has a plan - even if it doesn't match yours... THEN and ONLY then can He return to you what you released! SO HAPPY FOR YOU GUYS!

What a blessing!!! A complete blessing that you could be together as a family when you received this news! We'll be thinking of you as you move into this final home stretch. You're almost there!!

Congratulations! Welcome to an awesome family Eliot!
We will continue to pray that the rest of the journey goes smoothly and you are back "home" quickly.

I am SOOO happy for the three of you. Like my great-grandpa always said, "Good things come to those who wait!" Well, you spent your time waiting, and it's finally here!!! Can't wait to see you again, and meet Eliot! Congrats to the Mohrs!!!

Katie and Russ, congratulations! I am so excited for you. Eliot is adorable. God has truly blessed your family and we can't wait to see you again and meet Eliot. We (your Arbonne sideline) loves you and misses you.

Congrats!!!! That's Wonderful news!!! We are totally happy for you guys.

Once again, congratulations!!!!!!!! This is absolutely awesome and I am very excited that you will finally go home soon. You deserve it so much! Here's to a quick pink! :)
Virginie, Oscar, Cesar and Rosa

All I can say is Congratulations!!!
I can't wait to see the post that you have PINK.
May you have a smooth end to your process.
Clare

in the words of Dana, "shut. up." we've done our crying--bring on the par-tay! can't wait to see my new and littlest brother. katie and russ...my heroes!

I have been keeping up with you through your amazing blog-it humbles me every time I read an entry. Your ability to see good in every moment-positive or negative-is a true testament to God's presence in your lives! I am so excited for all of you and wish for you all the happiness in the world! Hope you will bring Eliot to visit BW!

CONGRATULATIONS!! Mike and I are celebrating and crying with joy for you. We've been terrible at keeping in touch, but I stumbled across your blog and after reading the whole thing, have been checking it almost every day for updates. Your family has been a constant in our prayers. So hello from Hong Kong, and please keep up the blog after you get home! Hopefully our boys can play baseball together someday... YOU'RE GOING HOME!!