I have a date tonight. With a married man. He's attractive, talented, Godly, and mine. I would love to say that Wednesday is always date night but it's not. We're not there yet. We're going out tonight to celebrate this day in 1998, when we committed to the craziness of marriage to each other. That's nine years. Nine very long years....=) 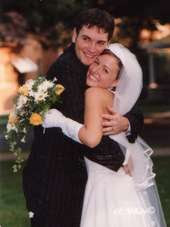 For a quick overview: I met Russ in college during freshman year. He had long hair and was obnoxiously loud. My first memories of him are not fond ones. From my side of things, he was the furthest thing from my ideal man, I could hardly spend 10 minutes with him without wanting to send this hairy loud guy back down to junior high. I just wonder how often God was chuckling to Himself every time I rolled my eyes at this guy from Arkansas, willing him to go away.

So what happened? Sophomore year I came to school swearing off all guys for the year (of course). One of my friends wanted to date Russ' roommate and asked me to ask Russ to go on a double date with them. I distinctly remember telling her that I would agree to that since there was NO WAY I'd ever start dating Russ. After several group dates, we started hanging out on campus together and he was growing on me.

The major turning point came when I went home for Thanksgiving and was running errands. I was in Walmart and thought of something funny and immediately wished Russ was there so I could share it with him. I literally stopped in the middle of the aisle, looked up at the ceiling and declared aloud, "NO! Don't even think about it, Lord. I mean it! I am SO NOT on board with whatever it is you have in mind..." But I knew Russ already had his proverbial foot in the door.

Before Christmas he asked if he could pursue me officially instead of just random times of hanging out. The more time I spent with him, the more I wanted to spend more time with him. He was unlike any other guy I'd ever known. He loved the Lord, he loved people, his family was important to him, he made me laugh, he was ridiculously creative and thoughtful, and he adored me. After 5 weeks of separation over the holidays, I could think of nothing better than becoming Russ Mohr's girlfriend.

We got engaged a year later and married 8 months after that on August 22, 1998. The last nine years have been incredible. Each year I find myself more in love with the man who I fought with God about. I'm still surprised at how great our relationship is and the way Russ loves me. He still makes me laugh, he still amazes me. He's an amazing father to E-man, the depths of which I'm sure I haven't even begun to see yet. I still check the clock every couple minutes and look at the driveway when I'm expecting him to come home. I still stand up a little straighter when someone introduces me as Russ's wife. I still get excited to show Russ a new outfit or a new haircut. I still get giggly when Russ flirts with me. 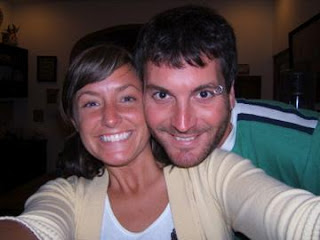 Overall, I'm still humbled by the fact that the Lord chose me to be Russ Mohr's wife. I pray that the Lord keeps showing me how to love him and build him up.


Happy anniversary, Russell. You're still my favorite.
Posted by Katie at 7:54 AM

You made me smile....what a great post! Happy Anniversary!!!!

HAPPY ANNIVERSARY!!! I love you both!! You and Russ spoke more hope to me in one look and you know what I mean....thank you for the testimony of your lives and marriage!

HAPPY ANNIVERSARY you two!!! hope you have the best date night ever -- and I loved seeing the wedding pic!!!

I knew it was getting close! Happy nine years, my friends. I love you both (or all three of you, now)! :)

Happy anniversary guys! 9 years...dang...how old does that make you now? Ha ha. We love you both. We wish we could be there to babysit :)

WOW!!! Congrats on 9 years...you two are still the perfect couple. And now the perfect family with El at your side!! Love you all!!

I just have to remind you that you also got an AMAZING family to go along with this AMAZING guy!!!

Katie, I don't say it enough but I am so happy that you are not only my sister-in-law and mother of my wonderful nephew...but you are one of my best friends!!! I love both of you!!! It has been an INCREDIBLE 9 years for all of us.

Russ, I love you and am so happy that you found Katie!!! Thanks for being such a great big brother and friend!!!

HAPPY ANNIVERSARY to two of my favorite people in the world!!!!

Happy Anniversary! Thanks for taking the time to share with us just how amazing you 2 are together. Don't take today for granted. Relish in every minute of your date... you BOTH deserve it.

Happy anniversary! Funny how things work out doesn't it? I've been with my boyfriend (fiance? it's a long story...) for over 4 years now. We started off as friends - he was in a serious relationship with s/one else - and I never thought it would happen. But it did! Thanks for sharing your story of finding unexpected love!