Your white friend is telling you that white privilege is real.

First of all, I have no business writing on this topic. It's way out of my league for one thing. Secondly, I'd venture to say we've globally heard enough from the "white mom of a black son." This isn't a blog post for the world though, I'm not trying to be the voice for this group or for this issue. It's mainly for MY peeps, MY community, the people I grew up with, the ones we used to attend church with, go to school with, work with, etc. I need you to hear this from me instead of an article by a person you don't know.

St. Louis is a mess right now. It's disrupted my faux-utopia and I can't stop thinking about it. I can't even begin to touch on the realities of what's happened to Mike Brown and in Ferguson or what it all means going forward.

And before 8 years ago I could have acknowledged it with a "this is awful" and moved onto something else. We're physically far enough away from Ferguson that I could get away from it all.

But now I can't. I have two brown boys that I love more than anything. And they won't always be holding a white lady's hand or being carried on her hip. 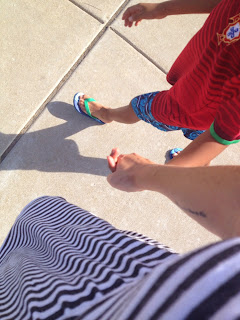 A trend I'm noticing as shrapnel of this whole event is the validity of white privilege. Not to distract you from the main issues of the main story, but I do want to address it.

My fear in all of this on a personal level is that everyone has filled in the blanks of the story already, no matter what facts come out. My fear is that people stop listening to those who finally have our attention, writing them off because of bad behavior. My fear is that the behaviors of a few have somehow cemented your beliefs (via your grandparents beliefs) of the many. My fear is that you don't believe in white privilege because look what "they" are doing to themselves.

When we started the adoption process for Desmond, the social worker finishing our home study asked how comfortable we were creating an environment for success as a trans-racial family. Feeling confident we knew what we needed to, we nodded and went to the next question. We got this, no problem. 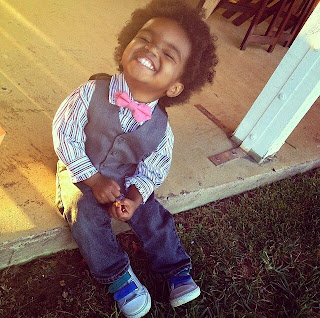 How to Succeed as a Trans-racial Family in 4 Easy Steps (as we understood it):

1. Don't dress Dez in anything with monkeys on it.
2. Provide toys and books with matching race of each child in our family.
3. Learn how to work with his hair/skin.
4. Keep positive role models of his same race active in our life.

For the first 18 months, that was all we needed. Then Trayvon Martin was shot. Media exploded with story after story of how racism still exists. I stopped reading about co-wash products for 3B/4A curl types and started reading about The Black Male Code. I couldn't process it. I couldn't wrap my mind around those realities, those conversations. And I couldn't put my finger on why I kept getting so overwhelmed until I read an article on White Privilege.

I was sitting in the dissonance of my white privilege and Dez's black male code.

My boys will encounter struggles where I encountered favor.

Like a lot of adoptive families, I'd never really looked at either issue. Now parenting couldn't move forward without wrestling them both. I don't think I even realized that white privilege was a real thing. (Another example of my white privilege.) And my childhood only addressed racism in history class.

Our boys are growing up constantly hearing how amazing they are, how beautiful their skin is, how great their hair looks. They're hearing about successful people of all races in national news and local stories. They're being raised to be proud of who they are in every aspect and to love this country. They're growing up in a diverse school in a diverse neighborhood. The people they're practicing their dinner table manners with are of all colors.

But they're also being raised in a time when some don't think Marc Anthony should be allowed to sing God Bless America, and Nina Davuluri shouldn't be allowed to become Miss America. In a time when twitter and Facebook are places where racists find friends. They're being raised two miles from a zoo where a woman this week walked her children around the primate house pointing out how the animals look just like President Obama. In a city where a white policeman wrote a threatening, racist letter to a black policeman. Near a city where another foster mom accidentally booked a hotel for a getaway the same weekend as a KKK rally. It's still here, this racism crap.

As a nation we've come so far yet I'm still incredibly nervous to send my children out into it.

The balance will be tricky, teaching them to be mindful of their surroundings, about having to prove to strangers what type of person you are, about how their white friends can wear certain clothes that they maybe shouldn't, how they could get singled out simply because of their skin color while simultaneously keeping them from bitterness, anger, suspicion and paranoia of the general public.

At some point in their lives they will get pulled over, they will go to the mall with a group of friends, they will stay up late having fun with their friends, they will walk down a dark street (Or a street in broad daylight as was the case for Mike Brown), they will want to return an entree at a restaurant. These are all situations where two clicks into a google search, you could find articles on race being a factor of what went wrong. And these are all situations I've encountered and had no issues. I've spent my life easily getting out of any trouble I've brought upon myself, authorities seem to giggle at this silly white girl and send her on her way.

Like the scene in The Butler as they watch their eldest head off to college, no longer under their protection, I feel uneasiness about the times when they will no longer be with us. And honestly? I wondered if that was because I felt they receive some sort of extra protection being carried around by white parents. Like a racial version of an "It's okay, he's with me" card. I found myself wondering if that's why I hadn't wrestled through white privilege or the black male code yet. Like I'd subconsciously assumed the boys would escape racism because we had.

White privilege doesn't make it dangerous for my boys to walk down the street but it's evil twin, racial profiling, does.

At this point, they don't get it. Eliot thinks Dez will make a more successful ninja because being darker allows him to hide more easily. (And Dez? As I type this he's putting a piece of toast into the air conditioner, so we have other things to work on before we get to this.) They don't care about flesh-colored bandaids when a Batman one is also an option. They're not trying to get a job or date someone. Eliot didn't even notice that this photo op was odd: 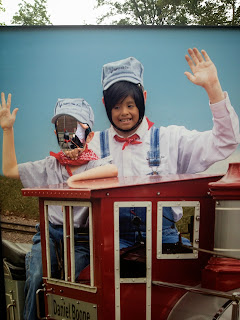 I needed you to hear this from me because I need you to realize it's true. Once you realize it's true you can start listening, REALLY listening to the voices begging to be heard. It's not to make you feel bad or to assume all other races hate you because you're white. Open your eyes, open your ears. Use your privilege to stand against injustice.
Posted by Katie at 1:55 PM

so much here. so good. so hard but so good. thank you.

So eloquently put. Thank you so much for sharing. This is honest and very good.

So good and so Powerful!!Real talk and a mother of 2 Black sons, I wish you well!!

Here here! It's people like you that will help America grow as a country.

I want to encourage you that there is no "trans-race family". Unless you have adopted different animals as children, we are one race. The human race. The change you desire is only going to come when we stop using God's creativity as our dividing lines. Check out Ken Ham's book One Race, One Blood.

Thank you for expressing so clearly what has been on my mind and heart, especially in light of recent events. From a mom of two adopted from Liberia.

It's the same for a bi-racial family! Very well written. It's nice to know I'm not alone!

We are a trans-racial family. My husband and I are white and our twins - 8 month old boy and girl - are black. These thoughts have come into my mind but I couldn't even begin to articulate what has been swirling around inside of me. This post put it perfectly into words. SO GOOD. Thank you! Thank you for writing this!

Very well put! I am white, my husband is black and we adopted a bi-racial baby girl. We've been married 7 years and our daughter is now 4 and I am finally and truely understanding white privilege and getting a glimpse of what it is like from the other side.

This is an amazing and well-written post. My husband and I are in the process of adopting a black child and these thoughts are constantly running through my mind. It's so sad the way people believe we are equal because of scholarships and equal employment laws, but these things do not even scrape the surface of the real issue. Americans need to change the way they think about race. Thank you for writing this.