Remember that episode of friends where Joey and Chandler invented "Fireball"? Well, there's some truth to that storyline. Guys do this. Even 30 year old guys. Just ask Mike Werkheiser about the many games we invented in N. Ireland over the last two
summers, or ask Slaps and all of the "Elders" who carry on the high-impact sport of "Gentlemen's Ball."

We are discovering every day that Eliot is 100% DUDE. He's such a boy. He has an imaginative way of transforming all of his toys into make-shift sports equipment or some sort of tool to use in his ongoing wrestling matches with the dogs. He climbs everything: Sammie's crate, his high chair, EVERYTHING. He's perfectly content just repeatedly beating the sidewalk with a stick. Yesterday he even turned a colander and a serving spoon into a helmet and a club. He loves to have balls thrown at him 'til he falls down, he growls all day long, he's discovered how to make himself burp (and thinks it's hilarious), and the other day at breakfast I caught him scooting a waffle square around on his tray while making "vroom" noises as if he were playing with one of his cars. He's not even two. Matt Blazer, Eliot is truly "Wild at Heart."

So just like Joey and Chandler, Eliot and I spent the better part of the day on Monday inventing a new game. We call it "Ball Pit." (Keep in mind, since he could sit up, he has always LOVED to play ball.) Here's how you play:

1. Gather a bunch of balls (any kind) from all over the house. In this case, we used 10.
2. Player 1 (Eliot) positions himself inside a laundry basket.
3. Pile all of the balls into the basket on top of Player 1. 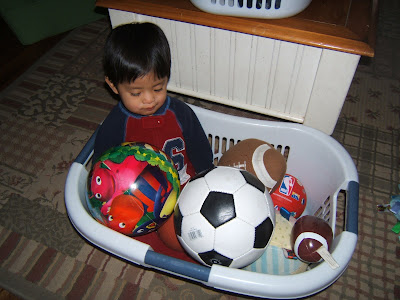 4. Player 2 (defense) stands outside the basket.
5. On "GO!", Player 1 begins flailing his arms about, throwing balls in every direction as quickly as possible, while Player 2 scrambles to gather the balls and throw them back inside the basket faster than Player 1 can empty it. 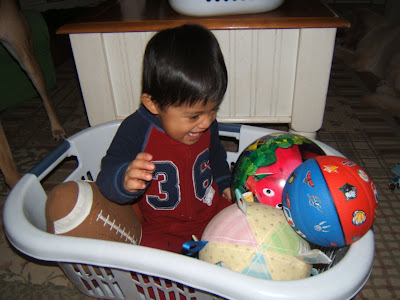 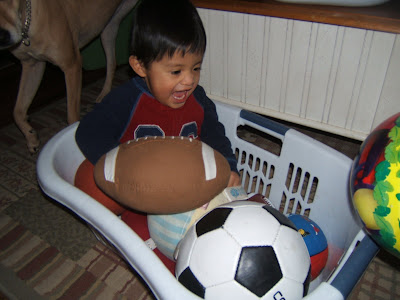 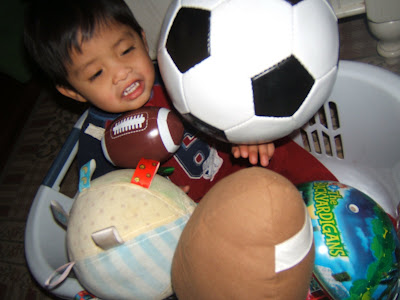 Eliot literally did this for 45 minutes straight without missing a beat, screaming and laughing the entire time. At his request, we played several more times throughout the day, and the next.... and the next. It's a favorite new past time. When he's finished he just kicks back and sits in the laundry basket full of balls and hangs out for a while. What other sport allows you to just chill in your own private ball pit and throw balls at another dude? It's pretty much the best game ever. Now we just have to find a laundry basket big enough for us to switch sides. 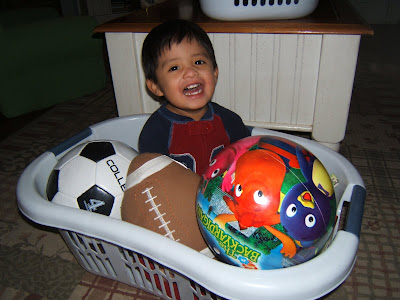 Pretty cute!
Reminds me of when Savannah was that age and Ryan played the same exact game with her --only it was in the crib and with stuffed animals (that girl had an insane amount of stuffed animals!). Savannah would be trying to throw them all out while Ryan would be trying to throw them all in... only usually Savannah ended up laughing so hard that she could barely stand up! It was hilarious.
Good times!!

That is hilarious!! :) Also...I have been meaning to tell you all that Josh and I do the samething with Mateo..."covering him up right before we go to bed"...aka one last time to adore our little guy all past out and sweet. :) We've never admitted it to anyone for fear they would judge us or not understand..:) But we never miss a night..and to tell you the truth Josh and I sometimes "subtly" race to be the first one in so we can be the one to cover (touch...) him that night. We even had a "discussion" about it one night because I felt like Josh kept beating me in there (or sneeking in without waiting for me :)) and hogging our sleeping son. How pathetic are we ? :) at least pathetically in love with our son!!

That's pretty awesome...now just wait until he decides to ride down the stairs in that laundry basket...

Sounds like fun! We'll have to try with Lucy!