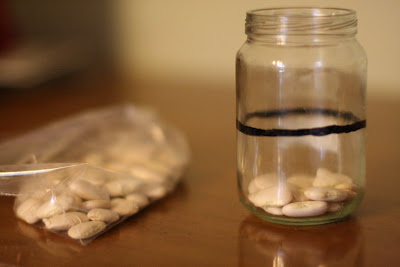 First Rule of Bean Club? You do not talk about Bean Club.

Second Rule: When you follow directions the first time, you get to put a bean in the jar.

Third Rule: When your parents have to repeat themselves, you remove a bean from the jar.

Fourth Rule: When your parents have to repeat themselves, you remove a bean from the jar.

Fifth Rule: When the beans fill the jar to the Hallowed Black Line of Triumph, you get a special activity as decided by said parents.

Sixth Rule: Your parents will break themselves of giving you warnings before action is taken. It's a bean, for pete's sake. If you lose one, or 6, you lose it.

Seventh Rule: Your mother's attempt at keeping your head warm this winter has turned into a Guatemullet, so you will be getting your summer buzz earlier than planned. This has nothing to do with The Bean Club, you just needed a formal notice.


Welcome to the new club at the Mohr's house. Not sure if it's this age, this crazy weather for the last few months, human nature, our lazy culture, the fall of man, or what, but it's surely not our parental habits* that have caused a certain child to need to hear something 12 times before deciding he should follow directions. It might be driving a certain couple cra cra. Enter The Bean Club. So far, it's working like a charm (sucker!) I'll keep you updated.

*Yes, I'm fully aware we created this monster. He wouldn't need 12 times if we didn't give him 12. I heard once that there was a study done and employer's number one complaint of our generation's work habits is having to repeat themselves in order to get anyone to get anything done. That's just not going to fly for this house. Hammer drop in the form of beans. You gotta start somewhere?
Posted by Katie at 5:35 AM

it's so hard! for parents AND kids.

we try to stick to this "obedience rule": "right away, all the way and in a respectful way."

Markie's class has a fish bowl and they get marbles, or get them taken away. They earn a pizza party when it's full. Seems to work really well. I should try it at home, never thought about it!

we have a marble jar! i use a votive candle holder :)

and i believe the reason is "all of the above," but there is definitely something about the age!

I'm pretty sure that my parents did the same thing...only with poker chips. Different generation.

Hilarious! we have a poop jar 'cause that's the kind of dscipline you need 'round here. But it works. I no longer have to scrape poop off a child far to old to poop anywhere but the potty.

Oh, and we're rocking the freshly shorn look of spring. The winter-fro was out. of. control.

We have a "marble club" in our house...its been going strong and working well for the past 6 months with a six and four year old. Love it!